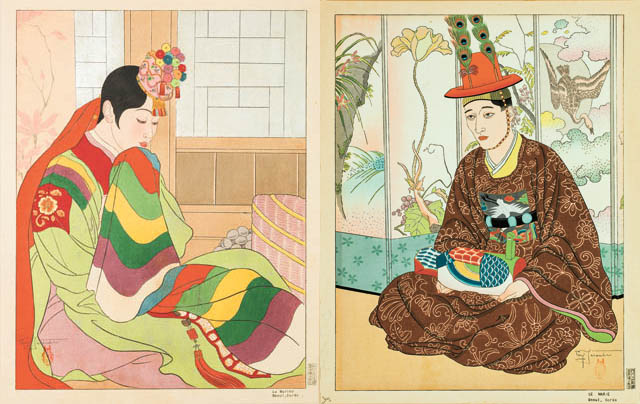 A Korean bride, left, and groom in traditional wedding clothes depicted by French artist Paul Jacoulet (1896-1960) in Japanese-style woodblock prints from 1948. The pieces are part of the new exhibition “Print Reborn,” currently running at Museum San in Wonju, Gangwon. Provided by the museum

WONJU, Gangwon - To see a traditionally dressed Korean bride and groom depicted on a Japanese-style woodblock print done by a French artist would be to see an unusual fusion of cultures and aesthetics.

These unique prints are currently part of a new exhibition at Museum San, titled “Print Reborn.”

Among the exhibition’s three sections, the most interesting is undoubtedly the second, “Reflecting the Times,” which features woodblock prints depicting Korean people by Scottish artist Elizabeth Keith (1887-1956) and French artist Paul Jacoulet (1896-1960). 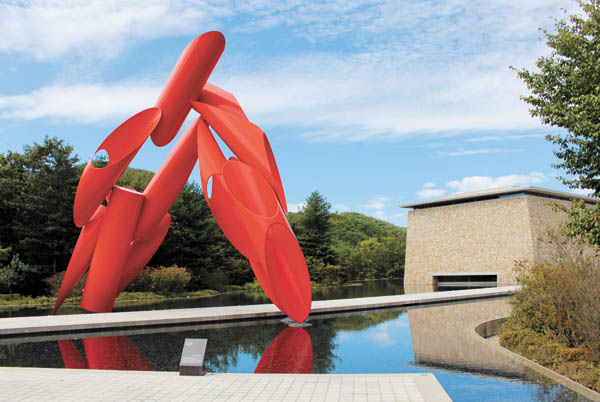 Keith stayed in Japan for a time, while Jacoulet was based in the country. There, they studied ukiyo-e, a form of woodblock prints that flourished in the 17th to 19th centuries in Japan and inspired European artists like Vincent Van Gogh.

Keith and Jacoulet each traveled to Korea several times and visualized their impressions through the ukiyo-e-style prints.

Keith is much better known to Koreans today than Jacoulet; several books and exhibitions have cast new light on her prints over the past decade here.

Her amiable and lyrical depictions of Korean people, especially women and children, have also gained popularity among Koreans today.

Additionally, her style is not so strictly Japanese and embraces some Korean elements.

Jacoulet’s prints, on the other hand, are strongly done in the Japanese style, although they depict Korea. Furthermore, their faces have a somewhat Western ambience, which could be confusing for Korean viewers, or maybe more interesting.

The first section of the exhibition, “An Encounter With Korean Contemporary Art” features works by 20 artists. They include minimalist silk screen pieces by Koo Ja-hyun, elaborate etchings by Lee Young-ae and drypoint pieces by Kang Seung-hee - which at a glance look like East Asian traditional ink paintings.

“You will be surprised at the diversity of the printing techniques and that of their visual effects,” said No Eun-sil, the exhibition’s curator. “Prints as artwork require intensive labor and skill by the artist - often more so than paintings - even though prints can be reproduced over several editions.” 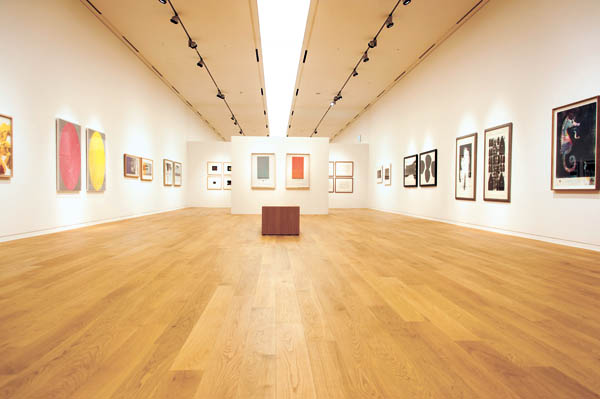 Tadao Ando is hosting the new exhibition “Print Reborn,”. It showcases artwork done via the printing process and includes etchings, silk screens and lithographs. Provided by the museum

Noh and other officials from Museum San added that October is an especially good time to visit the exhibition, as the autumn colors in the Gangwon mountains surrounding the museum reach their full glory.

The museum was designed by star Japanese architect Tadao Ando. 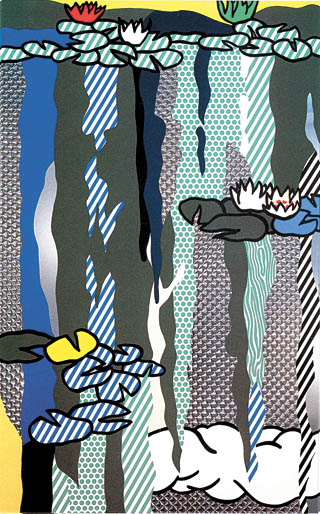 Among them is American pop artist Roy Lichtenstein’s “Water Lilies,”. Provided by the museum


The exhibition runs through Feb. 28, 2016. Admission is 15,000 won ($12.60) and covers the museum’s other exhibits except for the James Turrell gallery.
Admission covering the James Turrell gallery is 28,000 won.
The museum is closed on Mondays and located inside the Hansol Oak Valley resort in Wonju, Gangwon.
For details, visit www.museumsan.org, or call (033)730-9000.