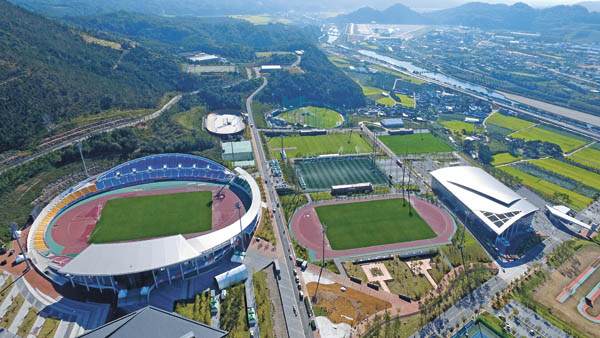 The main stadium and other sport facilities that will be used during the Military World Games in Mungyeong, North Gyeongsang. [NEWSIS]

The Military World Games - one of the largest multi-sport events in the world - kicks off in Korea today.

Some 7,300 military athletes from 122 countries are expected to compete, making it the largest event in the history of the games, according to the organizers, although North Korea is boycotting the event.

The games are taking place only months after the Gwangju Summer Universiade in July, a multi-sport event for college and graduate students from all over the world.

The military games are considered one of three largest multi-sport events after the Olympics and Universiade. They take place this year in Mungyeong, North Gyeongsang, from Oct. 2 to 11 under the slogan “Friendship together, peace forever.”

This year’s event is the sixth edition of the games, which was created by the International Military Sports Council (CISM).

The quadrennial event started in 1995 in Rome to celebrate the 50th anniversary of the end of World War II and the ratification of the United Nations Organization Charter.

Korea is the second Asian nation to host the event after India hosted the games in Hyderabad in 2007.

The main host city is Mungyeong, about 180 kilometers (112 miles) south of Seoul and the hometown of the Korea Armed Forces Athletic Corps. Events will also be held in the nearby North Gyeongsang cities of Pohang, Gimcheon, Andong, Yeongju, Sangju, Yeongcheon and Yecheon County.

The CISM, which was founded in 1948 to contribute to world peace by uniting armed forces through sports, has 133 member nations. South Korea became a member in 1957, while North Korea followed in 1993.

There will be a total of 24 events, the largest number of sports in the event’s history, with 248 gold medals up for grabs. Five of the sports are disciplines that can only be seen in the military games. 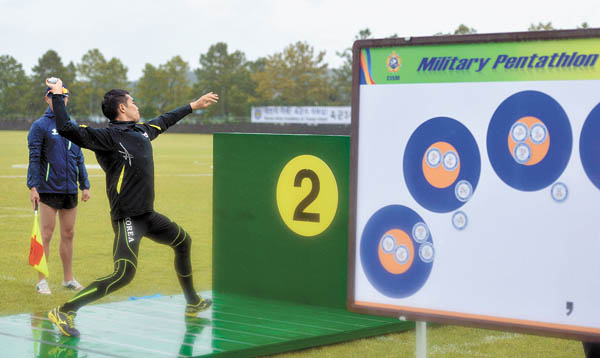 A soldier practices for the throwing event in the pentathlon, where participants throw a grenade-shaped object with precision and distance. [NEWSIS]

The military pentathlon is composed of shooting, an obstacle run, obstacle swimming, throwing and cross-country running, which tests athletes’ ability comparable to combat situations. The naval pentathlon consists of sports related to water, such as an obstacle race, lifesaving, utility swim, seamanship and amphibian cross-country.

In the aeronautical pentathlon, participants compete in a flying contest - which evaluates participants’ ability to maneuver aircraft - and six other contests that involve shooting, swimming, fencing, orienteering, an obstacle run, and ball handling.

In orienteering, which will take place in the Sobaek Mountains this year, participants are given a map and compass to find their way to a destination.

Parachuting, which has an individual and team category, measures the accuracy and style of skydiving.

Korea, which is sending 278 troops to the games, is hoping to land a third-place finish with more than 25 gold medals.

Korea’s best finish to date has been a fifth-place position, when the country collected 10 gold medals in the 1999 event in Zagreb, Croatia. In the latest 2011 edition in Brazil, Korea finished sixth with eight gold medals.

Although participation is limited to troops, fans will see some familiar athletes who are also successful out of uniform.

In men’s football, striker Lee Jeong-hyeop will feature despite his facial fracture in August. The 24-year-old, whose military service ends on Oct. 12, has been the regular pick of Korea men’s national football team coach Uli Stielike.

In women’s football, midfielder Kwon Hah-nul will also play. The 27-year-old sergeant is the only female footballer to play more than 100 games for Korea. In shooting, Asian Game gold medalist Eum Bit-na is gunning for the top position.

In golf, Heo In-hoi, who will become a corporal this month, is hoping to add a gold medal to his trophy cabinet. The 28-year-old has three wins in the KPGA Korean Tour, including in the Dongbu Insurance Promy Open which he won in April. 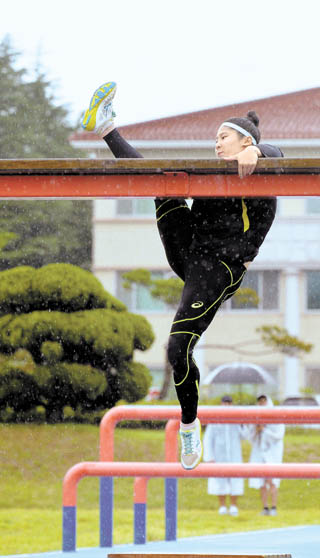 A female soldier practices at the obstacle course.[NEWSIS]

While hoping that the quality of the competition will be world-class, organizers have vowed to make the event cost-effective. The 30 venues that will stage the events are mostly existing facilities, while some minor renovations and repairs were necessary.

While existing military facilities are used for lodging, the organizers have also set up 350 caravans, each of which can hold up to four participants. The cost of the caravans is 3.5 billion won ($3 million), less than the estimated 80 billion won cost of building new apartments for visiting athletes. The caravans will also be sold to private customers for 16.5 million won after the games.

To further save costs, the main press centers and international broadcasting center will be located inside the judo and fencing gymnasium.

Organizers have also decided for the first time to charge admission for the opening and closing ceremonies.

In the opening ceremony, fans will see military uniforms from all over the world, and for some lighthearted entertainment, participating troops will also show off their dancing skills. Organizers have been promoting the “soldier dance” program since March.