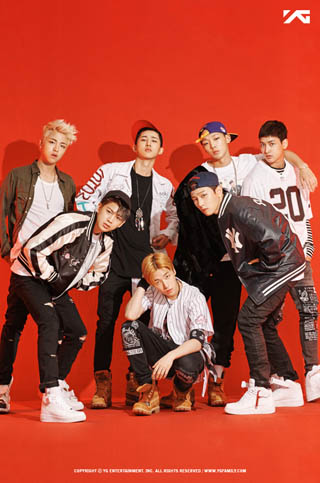 The album has six tracks, and its title track, “Rhythm Ta,” ranked No. 1 on four online music charts, a rare feat for newbie musicians.

The album was released Thursday at midnight, and many of the tracks placed within the top 10 on music portals’ lists of most-streamed songs.

As for the title track, which has a traditional hip-hop sound, group members B.I., Bobby and Koo Ju-ne participated in making the song along with a professional in-house composer from YG Entertainment, the group’s agency.

Although the album became available online Thursday, the CD will hit music stores on Monday.

To commemorate the release of their first album, iKon will hold their first concert, titled “Showtime,” at the Olympic Park in Songpa District, southeastern Seoul, on Saturday.

While this is the seven-member group’s first album release, the members already have fans due to their appearance on the reality TV show “Win: Who is Next” (2013), in which YG Entertainment trainees compete to become professional singers.

The team that won the contest debuted as the boy group Winner in 2014, while the second-place team became iKon.