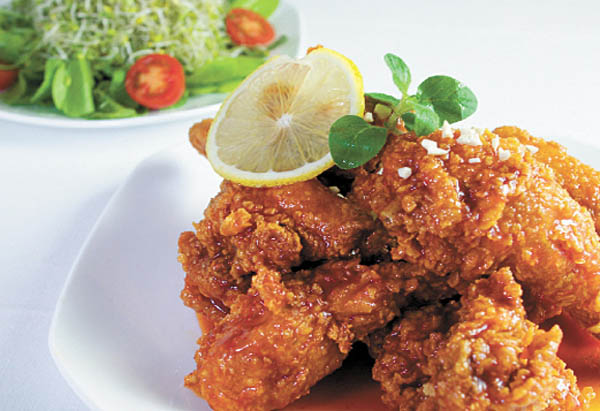 A number of mixed notions come to mind when hearing the above-mentioned dishes.

To begin with, they are proudly irreplaceable staples on Korean’s dining tables as much as they are vital players on global food scene. Because of their graceful representation of the country’s culinary traditions and culture, as well as their superb nutritional value, these national dishes have been aggressively promoted in foreign countries over the past few years both on the individual and government levels.

But at the same time, one cannot deny the boredom that comes from seeing these same dishes over and over like a set menu in many of the promotional projects globalizing Korean food. While these missions have been mostly successful, experts and industry insiders say they have reached their limits in spreading these dishes further on the global stage.

Instead, another culinary boom is expected to elevate the status of Korean cuisine to another level.

The stars of the newest trend are not exactly traditional, nor do they represent the prestigious food culture of Korea. In fact, they have their roots in foreign countries and come at a much lower price tag. However, with the an authentic twist added from long years of development in Korea, these dishes are showing the world what Korean cuisine has to offer beyond kimchi and bulgogi.

The Korea JoongAng Daily is introducing a number of local dishes that are not exactly traditional but that have bigger potential in foreign markets.

The list includes those that have already proven their potential abroad, and those suggested by foreign food experts as having the possibility of becoming future trends.

Fried chicken is definitely not a traditional Korean dish.

The method of frying chicken in spiced batter is known to have originated from southern part of the United States in the mid-1900s.

However, it is Korean-style fried chicken that is setting a new trend in the global food scene. The biggest difference with Korean fried chicken, often dubbed “the other KFC,” is its extra crispy batter which is the result of frying the chicken twice.

Also, the marinated version, which in Korean is called yangnyeom chicken, comes coated in a sticky sweet and spicy sauce and is quickly becoming popular among Westerners who think fried chicken should only taste like KFC.

What gives this dish so much potential worldwide is the countless number of recipes that can be created to cater to diverse preferences.

For example, instead of the red spicy sauce, fried chicken can be coated in sweet soy sauce or minced garlic or shredded green onion. The latter two options are especially popular in Korea because they counter the greasy flavor of the chicken.

The culture of pairing fried chicken with beer, known as chimaek, is already famous abroad. CNN introduced the combination as “Chicken’s Brangelina” in an article published in June.

Korean eateries abroad have already begun adding this mouth-watering dish to their menus, including New York restaurants Seoulites and Boka, which uses the popular Bonchon Chicken recipe, and Jinjuu in London. 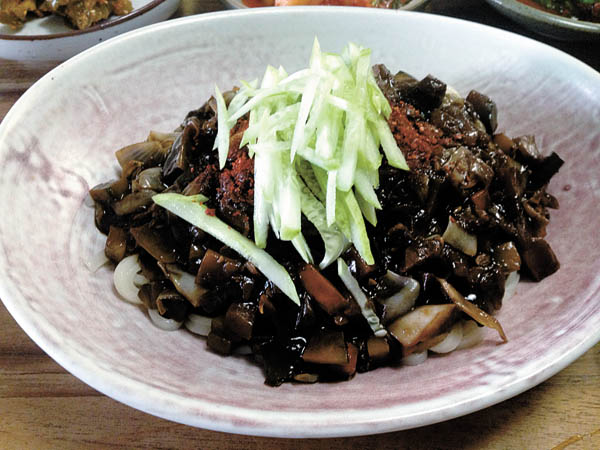 Jajangmyeon, or noodles in black bean sauce, is known in Korea as Chinese cuisine, but strangely the dish doesn’t exist in China.

That’s because the dish has been altered to suit Korean tastes so much that it hardly resembles the original fare.

This 100-year-old Chinese-Korean dish, which comes with a bowl of boiled noodles and a cup of chunjang sauce, was first introduced toKorea in 1905 when Chinese laborers swarmed into Incheon’s newly opened wharfs and settled down. This also explains why Korea’s one-and-only China Town was established in Incheon.

The original recipe was derived from zhajiangmian, a type of Chinese noodle dish topped with chunjang, but over the years, the Korean version evolved to be sweeter with an abundance of assorted vegetables and meat.

The dish is now so deeply rooted in Korean culture that it has become a tradition to order jajangmyeon when people move into a new house, probably because of the quick delivery service. On a day called Black Day, which falls on April 14 and is roughly considered the opposite of Valentine’s Day, groups of single friends get together to eat jajangmyeon.

Introduced under diverse labels such as black noodles or Chinese-Korean noodles, the dish has been sporadically expanding to foreign countries.

Representatively, a posh restaurant called Kimchee in London offers jajangmyeon on its menu and has been steadily attracting gourmands since it opened in 2011.

It is not news that gimbap is a Korean version of Japan’s sushi.

Instead of being filled with raw fish or other seafood, gimbap is rolled up rice and seaweed stuffed with cooked meats and cooked or fresh vegetables.

But despite the similarities between the two, no one can deny that sushi has been a stronger player on the global food scene, appearing on the menus of high-end restaurants in Western countries.

On the other hand, gimbap is only found at humble Korean restaurants that offer cheap fare.

Decades have passed since versatile types of gimbap evolved to suit young children’s lunch boxes and serve as a simple and cheap bite for adults.

And the latest development certainly stands out among the previous attempts to give it a new spin. ZenKimchi, a food blog started in 2004 by a group of expats living in Korea, who also published a book on the topic, introduced the staple as one of the “happy innovations” found in Korea cuisine.

The so-called premium gimbap certainly fits the global trend of pursuing a healthy diet, reducing the amount of rice used and hence the carbohydrate content by more than half and replacing it with fresh vegetables and other healthy ingredients.

At some eateries, white rice is replaced with brown rice to further enhance the nutritional value.

The main ingredients, which are generally low in salt, range from seasoned calamari to pork cutlet and even galbi, or Korean-style marinated short ribs. 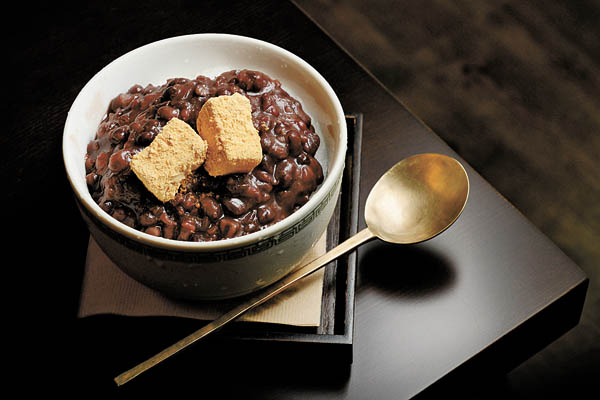 
Patbingsu is arguably one of Korea’s most well-known desserts.

When one searches online for “Korean dessert,” the shaved ice with red bean paste or other sweet toppings comes up high on the list of results.

Grinding ice and enjoying it with various sweet toppings is said to have originated in China in 3000 B.C. and then spread to other Asian countries and adapted to local tastes.

The Philippine version is called halo-halo, while the Taiwanese enjoy baobing. The shaved ice dessert pervasive in Korea, with red bean paste on top, is said to have been strongly influenced by the Japanese, and historical records show the treat was first introduced during the colonial era.

However, the red bean paste topping isn’t all there is to Korean patbingsu. Endless variation is possible, leading to what is called bingsu syndrome in and outside of Korea.

Other unique options are milk tea bingsu, where shaved ice is soaked in milk tea and topped with milk tea flavored ice cream. There is also chocolate bingsu, in which chocolate milk is frozen and shaved before being topped with ice cream and crushed cookies.

Hotteok, which is commonly described as pancakes filled with brown sugar, cinnamon and nuts, is one of the most beloved wintertime snacks in Korea. 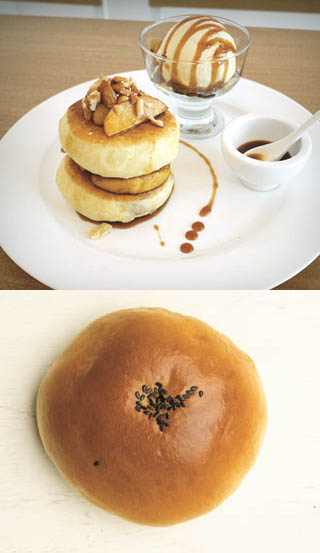 It is one of the few remaining old-time snacks that is still popular among the young generation, while also evoking childhood memories for older people when they see street vendors frying hotteok on a sizzling pan from the back of a trucks.

However, hotteok is actually known to have originated in China.

The original version is a lot different from what’s now popular in Korea, sometimes filled with vegetables and meat or sometimes just air.

Unlike their soft Korean counterparts, the Chinese versions have hard shells, with a texture resembling that of a cracker.

In recent years, this street food has been gaining popularity in the overseas market and has transformed in various ways.

At the Momojein, a Korean restaurant that recently opened in Hong Kong, hotteok is served as both an appetizer and a dessert.

For dessert, hotteok is introduced in its the original form, and paired with a scoop of vanilla ice cream.

And at New York-based eatery Mokbar, hotteok transforms into an appetizer filled with pork.

It is a well-known fact that bread is far from traditional Korean cuisine.

It wasn’t until the 19th century that bread was first introduced to Korea from Japan, and it wasn’t widely consumed here until the 20th century.

For this reason, Korean bread shares many similarities with that of Japan, with sweet flavors added either in the dough or the filling to make it more of a dessert rather than a full meal as it is in Western countries.

One of Korea’s representative and traditional breads is what’s called patbbang, which is a soft bun filled with red bean paste.

These types of traditional bread, however, are not so popular among Korean youngsters.

With more high-end bakeries entering the local market, the old-fashioned staples have been losing their foothold here.

According to the company, one of the unexpected hit products of their two recently opened branches is what’s called Brioche Creme de Lait Red Beans, a French name for a soft bun filled with red bean paste and custard cream.

In the Western country, where red bean paste is still exotic, the new combination was fresh enough to attract local consumers.