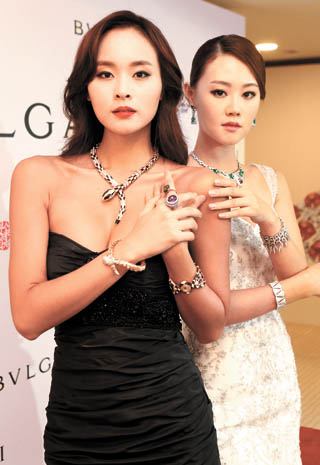 Models wearing jewelry from Italian luxury brand Bulgari that are worth between 300 million won ($254,994) and 600 million won pose at the executive lounge on the 19th floor of Haeundae Grand Hotel in Busan on Thursday. Bulgari is displaying its collections to celebrate the Busan International Film Festival, which kicked off Thursday and runs through Oct. 10. Bulgari is the official sponsor of the festival, which is celebrating its 20th anniversary this year. The jewelry will be on display until Saturday. By Song Bong-geun