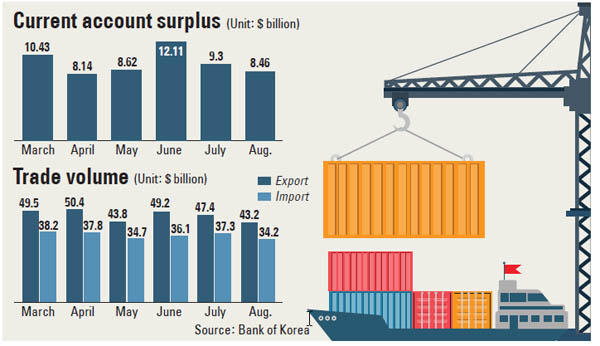 Korea’s current account balance has continued to post a surplus for the 42nd consecutive month, the longest streak recorded.

The current account has been enjoying a surplus since March 2012, far exceeding the previous record of 38 consecutive months set in June 1986.

The surplus shrunk from the previous month largely because of a sharp drop in imports. Exports also shrank compared to a year ago, but not at as great a rate.

According to the Bank of Korea on Friday the current account surplus in August was $8.46 billion, smaller than the $9.3 billion in July.

The trade account was also smaller. In August the trade account surplus was $8.97 billion, less than the $10 billion in July. This was largely due to the drop in imports. Compared to a year ago, imports shrunk $17.7 billion to $34.2 billion. Exports lost 11.7 percent year-on-year to $43.2 billion.

Exports of computer chips and information telecommunication devices grew in August while exports of petrochemicals, chemicals and shipbuilding all fell.

Overall electronic devices saw a 0.2 percent increase compared to the same period a year ago to $14.2 billion. Among such exports, ICT devices grew 0.1 percent while semiconductor exports increased 4 percent during the same period. However, display panels saw an 18 percent drop while other consumer electronic goods like microwave ovens and televisions saw a 10.7 percent decline.

The shipbuilding industry has been hit badly as global demand has weakened. Leading shipbuilders have been undergoing corporate restructuring that have been met with strong labor union opposition.

Exports to Japan saw the largest drop of 24.7 percent to $1.9 billion. Exports to Japan in the first eight months of this year experienced declines of 20 percent. The fall was, however, eased from the 28.8 percent year-on-year decline reported in July.

Exports to Europe fell 20.8 percent to $3.42 billion. Europe was also the second economy that saw the biggest decline in exports in the last eight months. It fell 14.4 percent.

Exports to Europe, unlike Japan, saw a larger fall in July of 6 percent. Exports to China in July declined 9.1 percent in August.

Exports to the U.S. also turned around from a 1.4 percent increase in July to a 4.6 percent decline in August.

The service industry improved as the deficit shrunk compared to July, which was heavily affected by the outbreak of Middle East respiratory syndrome (MERS).

On the financial account, Koreans withdrew a net $1.39 billion in August. This is the first time since October 2011 in which Korean investors withdrew their equity investments overseas.

“Overseas investments were withdrawn as the global equity market has become unstable,” said Park Seung-hwa, a Bank of Korea official.