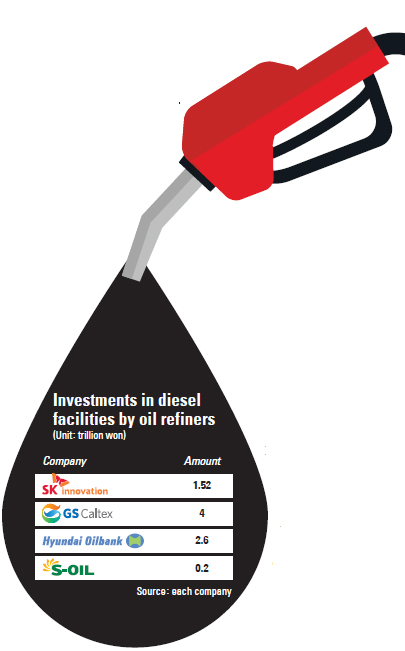 Korean oil refiners who have invested trillions of won in expanding diesel production facilities are increasingly concerned about the financial fallout from the Volkswagen scandal.

According to oil refiners, most global companies have been aggressively expanding their facilities, particularly for diesel, after seeing the growing popularity of the power source as European automakers, such as Volkswagen and Audi, operated under the slogan “clean diesel.”

Local oil companies followed the worldwide trend. S-Oil, one of the nation’s major oil refiners, invested about 200 billion won ($170 million) in December last year to increase its diesel production by 10 percent. The company also invested 5 trillion won this year to expand its petrochemical business, including diesel production, after seeing the demand for diesel fuel increase over the past few years.

Oil companies are growing increasingly concerned about their major investments as the Volkswagen scandal, where emission readings were falsified, is spreading to a general distrust of diesel vehicles, while the government is trying to tighten regulations on diesel emissions.

Diesel is one of the most significant products for Korean oil refiners, which sell half of their outputs in the country and export the rest. The Korea National Oil Corporation (KNOC) said an average of 139.69 million barrels of diesel was consumed in the country from 2011 to last year and about 76 percent of them were used in vehicles.

About 30 percent of each company’s annual revenue was made from selling diesel during the time, the KNOC added. The revenue for SK Innovation last year, for instance, was 65.086 trillion won and 34.47 trillion won of that was for export.

Industry insiders say the Volkswagen scandal might not influence oil refiners’ profits immediately, but it could eventually lower the overall demand for diesel, since the reputation of “clean diesel” has been seriously damaged. In a survey of 105,672 consumers conducted by research firm Consumer Insight from July to August, about 40 percent of respondents who considered buying a new car said they are going to buy a diesel car in July, but the figure dropped to 19 percent when the research firm asked them again in September after the VW scandal broke.

Recent diesel sales as well have not been good despite the popularity of diesel cars. In the first half of the year, 152.09 million barrels of diesel were produced in the country, a 3.7 percent rise from a year ago, but only about 46.3 percent, or 70.42 million barrels, were consumed.

The same trend is also reflected in global markets. According to KNOC, about 53 percent of cars sold through September in Europe were diesel-powered, but the figure might drop to 22 percent by 2022 because of the scandal, meaning that demand for both domestic and export markets might shrink.

“We expect overall sales of diesel cars not to fall, since the [Volkswagen] scandal was more like a moral hazard by one company, not a problem of diesel itself, but it would take some time for consumers not to recognize diesel as a bad fuel,” said a spokesman of an oil company.

The scandal is also a headache for the petrochemical businesses. If sales of diesel cars drop, the price of naphtha will rise, and it could badly impact local petrochemical companies. Gasoline can be refined from both crude oil and naphtha. “In the long term, the demand for naphtha could increase if the sales of diesel cars decrease,” said Lee Choong-jae, an analyst at KTB investment & Securities. “If the price of the component rises regardless of the car industry’s poor condition, the overall profitability for local companies could get worse.”

Lee said the price of naphtha has stabilized due to imports from Europe. Since the number of diesel cars was consistently increasing since the 1990s, Europe imported diesel from Asia and exported gasoline to Asia.

“If the demand for gasoline increases, the export volume of naphtha by Europe will decrease,” Lee said. “The demand for environmentally-friendly cars could increase shortly, but the industry still needs more time to grow. Companies in the business need to find solutions that can make up for losses it might have in the diesel sector.”