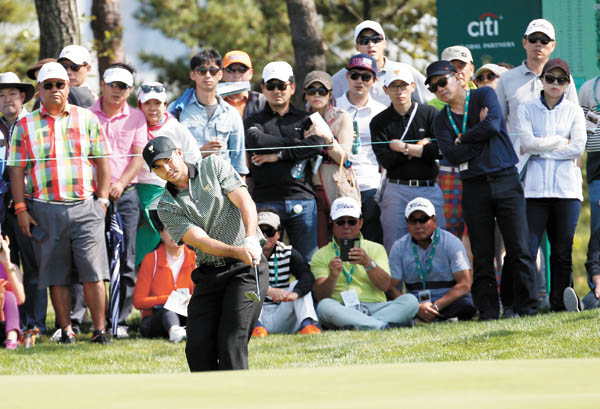 A spectator holds his smartphone to take a picture right next to the green while International Team player Jason Day of Australia plays a chip shot onto the sixth green during his foursome match at the Presidents Cup tournament at the Jack Nicklaus Golf Club Korea on Thursday. [AP/NEWSIS]

INCHEON - While some of the world’s top golfers began their first round in the Presidents Cup on Thursday, over-anxious fans tainted the opening days of the prestigious event.

Despite the tournament officially starting on a midweek morning, some 18,400 fans visited the Jack Nicklaus Golf Club Korea in Songdo IBD on Thursday.

Some 7,000 spectators visited the club on Wednesday for the practice rounds.

But while the attendance figures were encouraging for players and organizers, some fans were intrusive and aggressive as they attempted to get close to the world-class players and catch the best glimpse of play.

At the practice rounds on Wednesday, there were excessive requests for autographs from star players.

In an attempt to calm down some of the overzealous fans, U.S. veteran Phil Mickelson even told fans in Korean, “After the match.”

Regardless of attempts to control fans, some even entered the teeing ground to ask for autographs, and one spectator shouted at Bubba Watson asking for his ball marker.

Another problem organizers faced was the use of smartphones. Though digital cameras are prohibited during the tournament, smartphones were used by spectators across the course.

On Thursday, at the par-4 second hole, one local spectator was filming the drive shot of Rickie Fowler with his smartphone and had to be warned by officials.

Other fans talked openly on their phones while some of the best players in the world tried to play.

Probably the worst behavior was fans running across the course to take shortcuts between holes. Although officials and volunteers tried to stop the “jaywalking,” they were too short-handed to prevent fans intruding on the course.

“I don’t know why people are doing this,” said Lee Ki-ho, an event volunteer who controlled the galleries. “Some fans are doing what they should not be doing.”

While tournament officials are trying to cope with the disruption by fans, they are also having problems controlling what fans can take into the club grounds.

The President Cup office has listed prohibited items on their website and brochures.

Despite this, some visitors challenged security guards who were disallowing restricted items and had to return to their cars or leave them at the gate.

As the weather was sunny, many fans tried to bring umbrellas and water into the clubhouse area, but most of them were refused at the gate. Some spectators blamed a lack of information because though the event’s Korean website lists the prohibited items as “food and drinks,” many thought the event was like other local golf events where the prohibition rules are not that strict.

“Most items that people tried to bring in was water, but that isn’t allowed as I’m told,” said volunteer Kim Min-chul, who welcomed visitors at the main gate. “Just like you can’t bring water at the airport gate, we are trying to do the same since someone can bring flammable liquids with them.”

Organizers don’t allow umbrellas with printed logos unless it is purchased in the official merchandise shop. The organizers said on their Korean website that the umbrella can be used only on a rainy day.

However, some players ignored the disturbance. “In my scale of 100, I think I would give close to 80 points for local fans’ supporting etiquette,” said International Team vice captain K.J. Choi. “It was better than I thought, and players were satisfied by their support.”

Event officials expect to be busier on Friday with more visitors as it is the national holiday for Hangul (the Korean alphabet) and the weekend.

Spectators intending to visit the club, however, have been cautioned to prepare for heavy traffic jams on the routes to the Jack Nicklaus Golf Club Korea.

For this tournament, Academy-ro, which surrounds the golf club, and the street between the Central Park train station are reserved for approved tournament vehicles.

Visitors can park for free at the underground parking lot of Central Park and the parking lots of Posco E&C Towers. From these two places, visitors need to take a free shuttle that runs continuously to the main entrance of the Jack Nicklaus Golf Club Korea.

Even on the first day, many vehicles were seen turning around from nearby Academy-ro as drivers ran out of patience with the traffic jams.

Officials put parking and transportation information on their brochures and website, but as they only put pictures without detailed directions, some first-time visitors were troubled.

The city of Incheon said it would reinforce inspection of illegal parking on nearby streets.

“I think the team has a good feeling,” said U.S. Team captain Jay Haas. “Obviously, it was a great start for us, but I think they all realize it’s a long series right now.”

For Friday, when five four-ball matches are scheduled, Bae Sang-moon will play along with Korea-born Kiwi Danny Lee to face Rickie Fowler and Jimmy Walker.

But fans won’t see a matchup between No. 1 Jordan Spieth and No. 2 Jason Day.

Spieth is paired with his first round partner Dustin Johnson to go head to head against Oosthuizen and Grace, who collected the only point for the International Team.

Day is paired with compatriot Adam Scott to play against Zach Johnson and Phil Mickelson. On Thursday, two Americans got a 2-up win from the Day and Steven Bowditch group.

The United States is benching Kuchar and Reed, the only Americans who lost on Thursday, while the International Team sits out Anirban Lahiri and Hideki Matsuyama.

“We can’t get down now,” International Team Captain Nick Price said. “Golf is a fickle game, especially 18-hole match play. I’ve got to go out there and go talk to them now and just say, ‘Hey keep your chins up and let’s play golf again tomorrow.’”