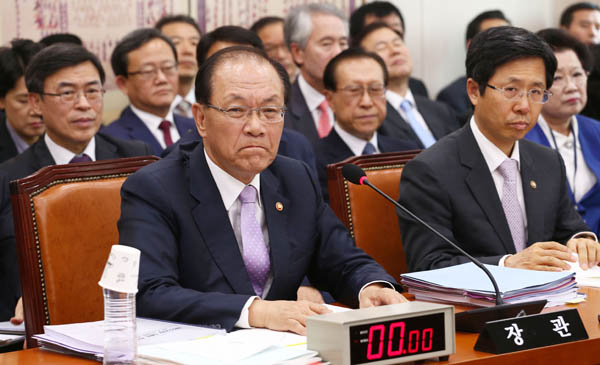 Deputy Prime Minister and Education Minister Hwang Woo-yea, left, is grilled by lawmakers on the National Assembly’s Education, Culture, Sports and Tourism Committee on Thursday about the government’s plan to take control of writing of history textbooks from private publishers. By Kim Kyung-bin

The nation’s education chief said Thursday that the government will announce its plan for new history textbooks as soon as the National Assembly audit of the Park Geun-hye administration wraps up, admitting that the president told the Education Ministry to develop a new textbook.

Deputy Prime Minister and Education Minister Hwang Woo-yea was grilled by lawmakers on the National Assembly’s Education, Culture, Sports and Tourism Committee on Thursday about the government’s plan to take control of history textbooks from private publishers.

After the presidential office and ruling party announced its intention for the government to take control of history textbooks for middle and high school students, the opposition party vowed to fight the plan.

“The Ministry of Education will make the announcement about its plan as soon as the audit ends,” Hwang said. “After the ministry makes the announcement, the plan will be finalized after some administrative procedures. Before the announcement, we will reflect the opinions of the ruling and opposition lawmakers expressed today one more time in our plan.”

The National Assembly’s audit of most ministries of the government ended Thursday except for the National Intelligence Committee. The Education Ministry was expected to make the announcement on textbooks next week.

Currently, eight publishers develop and supply Korean history textbooks for middle and high schools. Conservatives have complained over the past few years that seven of them were leaning far too left, offering ideologically biased history to the nation’s youth.

“The general guidelines President Park handed down to the Ministry of Education was to make a balanced, respectable textbook,” Hwang said. “We are working hard to make a proper textbook for the future generation by uniting public opinion.

“We are obligated to make a textbook that teaches a lesson to the future generation,” he said. “And the state must take the ultimate responsibility to accomplish national unity.”

During the audit, opposition lawmakers including those from the New Politics Alliance for Democracy pressured Hwang to admit that the government decided to go back to an earlier system of state-issued textbooks.

State control over Korean history textbooks was first introduced under the military rule of Park Chung Hee, the late father of President Park, in 1974 and ended in 2010. The controversy over the current system, in which schools choose from a range of textbooks approved by the Education Ministry, started in 2013 when the ministry ordered all eight publishers to make corrections -- even after the materials passed an initial screening by the state-run National Institute of Korean History.

The NPAD said Thursday that the government must stop its plan. Rep. Lee Jong-kul, the NPAD’s floor leader, proposed that the ruling and opposition parties and the government recruit neutral experts and listen to their opinions in a public discussion.

NPAD Rep. Lee Sang-min, chairman of the National Assembly’s Legislation and Judiciary Committee, said the textbook issue is an important matter that requires a social consensus, and the current system under which the Education Ministry has the power to make changes must be revised. “I will initiate a legal revision so that the government ministries cannot make a change arbitrarily,” he said.