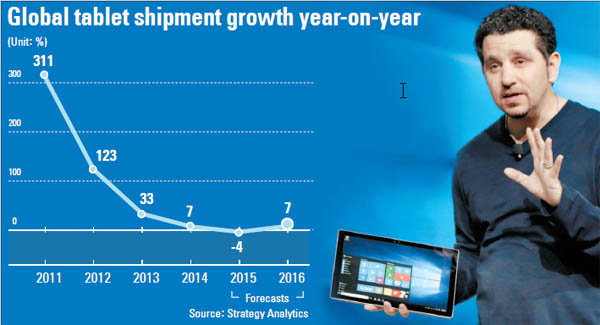 Tablets are predicted to reverse this year’s 4 percent decline in shipments and grow 7 percent next year, thanks to fresh demand from corporations, as well as educational and public institutions, market researcher Strategy Analytics said in a recent report.

“Consumer surveys show that tablets and PCs are nearly equally desired among owners of both devices” said the report. “With over 700 million of these devices beyond the midpoint of their lifecycles in 2015, the hard work put in by vendors like Apple, Microsoft and Samsung to redefine the tablet will bear fruit in 2016.”

The outlook for tablet sales was initially rosy. Led by Apple’s iPad, tablets posted an impressive 311 percent growth in annual shipments in 2011, and 123 percent in 2012, before slowing to 33 percent in 2013 and 7 percent in 2014, according to Strategy Analytics.

The main culprit is the rise of the phablet, or a small tablet-sized smartphone. First introduced by Samsung Electronics’ Galaxy Note series, the new product category increasingly drew consumers away from tablets.

Samsung’s latest Galaxy Note 5 has a display size of 5.7 inches and Apple’s iPhone 6s Plus offers one at 5.5-inch.

Ultrabooks - a type of laptop as thin and light as a phablet - and ultra-small “mini PCs” have also cannibalized tablet sales.

Ultrabooks have come a long way since they were first introduced to compete against the MacBook Air. Now, major producers include Samsung, as well as smaller players like Dell, Asus, HP, Lenovo, HP and Toshiba.

Mini PCs, on the other hand, may not be the most powerful computers, but they are small enough to fit in your pocket and can be purchased for less than 100,000 won ($86).

“Fast growth in the early years means that hundreds of millions of tablets will need to be upgraded in the next one to four years,” the report said.

Foreseeing increasing demand from corporate clients, as well as public agencies and educational institutions, major tablet producers have unveiled a series of new tablets with varying sizes and formats. The emergence of tablets with screen sizes starting at 11 inches “plays into the prosumer and enterprise segments due to cost and functionality,” said Peter Kinghe, a research director at Strategy Analytics.

Apple, for instance, came up with a giant iPad Pro in September, which features a 12.9-inch Retina display with 5.6 million pixels, by far the highest-resolution of any iOS device. The new accessories - the Smart Keyboard and Apple Pencil, a stylus - make the iPad Pro more like a hybrid tablet PC.

Microsoft on Tuesday unveiled the new Surface Pro 4, which it claims is 50 percent faster than Apple’s latest 13-inch MacBook Air. The new tablet runs on Windows 10, the latest operating system from Microsoft, and has a 12.3-inch screen - one inch smaller than MacBook Air.

Microsoft is “leading the growing pack of professional-grade tablets running Windows 10,” said senior analyst at Strategy Analytics. The release of Windows 10 in July provided opportunities “to better position tablets against PCs on productivity needs and compatibility with the office setting,” he noted.