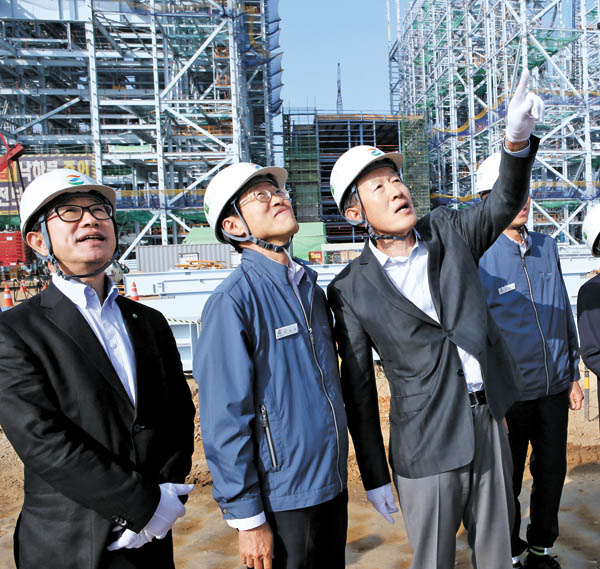 Splitting off from the country’s fourthlargest
conglomerate LG in 2004, GS
Group is a relatively young unit led
by Chairman Huh Chang-soo, who
also serves as the head of the Federation
of Korean Industries.
The Huh family, the biggest shareholder
of GS Group, jointly managed
LG Group before the separation with
GS. It is known as one the most successful
cases of joint management in
Korea — and one of the oldest.
In 1947, the late Koo In-hwoi and
the late Huh Man-jung jointly established
the Lak Hui Chemical Industrial
Corporation, now known as LG
Chem. The company was the first of
LG’s many future affiliates.
The founder’s grandson, Huh
Chang-soo, sought to expand the
scope of his business portfolio through
mergers & acquisitions and investments
since taking the helm at GS in
2004.
Now, the energy and retail conglomerate
is ranked 7th largest by
sales.
GS Group currently runs subsidiaries
in several fields ranging from
oil refining, construction, convenience
stores and home shopping — GS Caltex,
GS Engineering and Construction,
GS Retail, and GS Homeshopping.
With the existing business, GS
also acquired 15 companies such as
Incheon Energy and STX Energy from
2010 to 2014, according to Chaebol.
com, a corporate research information
provider.
While Huh has expanded scope,
he also sought to diversify the business
to reduce risks.
GS was heavily dependent on GS
Caltex, the nation’s second-largest oil
refiner and a crown jewel of the group,
to make profits.
The refiner accounted for approximately
80 percent of the group’s entire
sales back in 2011, while most of the
remainder came from retail sales
At the time, the chairman warned
that having such a lopsided business
model with an excessive focus on refining
could be problematic, adding
that the shift towards other industries
such as services and consumer products
will be necessary.
Following the efforts, GS Caltex
now makes up some 60 percent of
sales.
Faced with the fluctuating oil
prices that have been hitting record
lows, GS Caltex has been focusing on
diversifying its crude suppliers to include
countries in West Africa, Mexico
and the United States in an effort to
reduce its reliance on oil from the
Middle East.
Amid unfavorable business conditions,
Chairman Huh called a strategy
meeting in August, where he emphasized
the role of leadership.
“Leaders should pay attention to
even slight changes and develop keen
insights,” he said.
“A successful leader should enjoy
venturing into new fields and anything
new, as well as learn from the
experience to make accurate judgments
and actions.”