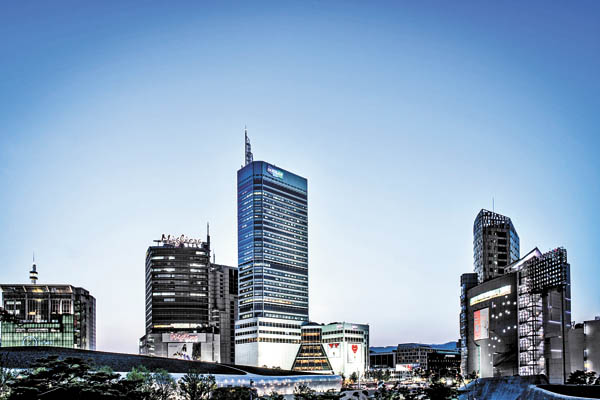 Doosan Tower or Doota standing in the middle of Dongdaemun, in downtown Seoul. Dongdaemun used to be considered the nation’s fashion center but recently businesses have been shrinking. Provided by the company

Heavy industry conglomerate Doosan Group hopes to contribute to Dongdaemun’s economy with a duty free business that will attract hordes of Chinese tourists.

Doosan is one of the contenders
vying for the license currently held by Lotte Group which will expire in
December.

To raise its chance of winning the spot, Doosan Group is promoting cooperation with the neighborhood economy.

Doosan Group Chairman Park Yong-maan earlier said the company will create a true cooperative model where both big companies and small and midsize companies can profit from its duty free business.

On Monday it announced it will return 10 to 20 percent of the profits from the duty free business back to
society.

Doosan plans to build the duty free store on a 17,000 square-meter area in the heart of Dongdaemun, which was once Korea’s fashion mecca. Dongdaemun recently has been losing earnings despite the number of tourists.

Doosan was sought out to compete for the duty free business as the company’s headquarters is located in the struggling district.

According to an assessment by the Ministry of Culture, Sports and Tourism, Dongdaemun was the second most visited area in Seoul after Myeong-dong last year. Last year 7.06 million foreign tourists visited the fashion town while there were 8.86 million in Myeong-dong.

Insadong, the third most popular tourist destination had 3.46 million tourists.

Sinchon and Hongdae were the next most popular destinations with 3.41 million. However, the businesses haven’t generated much profit despite the influx of foreign tourists. A Dongdaemun tourism association has estimated that revenue made by Dongdaemun last year was roughly 12.4 trillion won. This is a 32 percent drop from 2002 when the neighborhood started to thrive.

Doosan has set up a three-track plan - turning Dongdaemun into the ultimate shopping and tourism destination that would attract Chinese tourists, revival of the Dongdaemun fashion business and securing sales channels for Korean brands.

The Doosan duty free shopping district would sell 460 brands, including global luxury names like Chanel and Louis Vuitton. It already has a letter of intent signed by the brands.

“Unless we are able to attract foreign tourists including Chinese, any cooperative strategies with the local business that we will have will become ineffective,” said a Doosan official. “We were able to attract major high-end brands by utilizing our
fashion magazine Vogue’s global network.”

Doosan estimated that when the duty free business is launched by 2020 it will attract an additional 2.5 million foreign tourists to Dongdaemun.

As part of its local business cooperation strategy it plans to expand its annual Doosan fashion conference that has been held since the fashion retail complex Doota was opened in 1999. The conference has been held under the name “Doota Venture Designer Conference,” and has helped launch the careers of 160 designers.

Designer Shin Yong-gyun, 34, who held a fashion show at Seoul Fashion Week at the Dongdaemun Design Plaza (DDP) in March this year, is one of the rising designers who was found through the conference.

Shin, who graduated from Central Saint Martins, University of Arts, in London, won the conference in 2012. The designer received 100 million
won with free office rental for a year at Doota.

Some of the wardrobe costs involved in the Seoul Fashion Week show were financed by Doosan.

The conglomerate said it plans to find designers such as Shin and through its duty free business it will help them launch and develop their careers overseas.

“The duty free store will become the strategic base for new Korean designers to compete with overseas designer brands,” said a Doosan official.

The Korean conglomerate has already secured a parking lot for 1,000 vehicles including tourist buses. Parking will not be limited to duty free shop visitors only, but also customers visiting Dongdaemun.

Doosan is considering creating a K-style town in cooperation with other Dongdaemun shopping malls as well as running an all-night duty free business to contribute to the area’s all-night shopping business. ?

It also plans to raise the ratio of Korean products sold at its duty free district to 50 percent by 2020, 10 percentage points higher than the average duty free businesses in Korea.