‘Little Devil’ keeps her eye on the ball

‘Little Devil’ keeps her eye on the ball 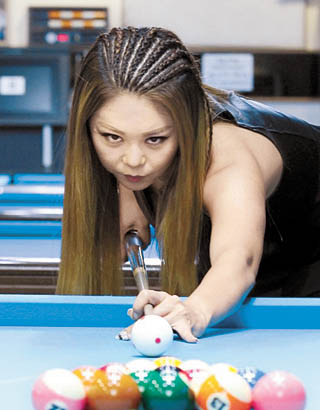 Kim Ga-young practices at a pool club in Jayang-dong, Gwangjin District, in western Seoul on Sept. 15. Kim, 32, is currently ranked No. 1 in the World Pool-Billiard Association rankings. By Yang Gwang-sam

Kim Ga-young’s style speaks for itself. With her cornrow hair and all-black clothes, the 32-year-old is signaling she’s more than an average player.

Throughout a recent interview, she gave direct and clear answers, just like her forthright appearance. “Can you refine my answer a little bit in the story?” she said. “I’m a person who speaks candidly.”

Kim, nicknamed “Little Devil Girl” in the West, first grabbed a cue when she was in fourth grade, under the guidance of her father, who was running a billiards club. After school, Kim’s routine was to play three-cushion billiards or four-ball billiards with adults.

She switched to pocket billiards when she was a middle school student, and after six months playing pool, she became the No. 1-ranked player in Korea. With no challenger in the domestic level, she turned her focus internationally after graduating from Incheon Munhak Information High School. She left for Taiwan in 2001 and played for more than 10 years in Taiwan and the United States.

Last month, she returned to No. 1 in the World Pool-Billiard Association (WPA) world rankings, and on Sept. 5, she won the CBSA International 9-Ball Open in Lianyungang, China, for the third time.

Although she could relax with these honors already under her belt, the two-time Asian Games silver medalist says there is still lots left to do. In an interview last month with Ilgan Sports, an affiliate of the Korea JoongAng Daily, Kim said she wants to make billiards more popular with the public.

Q. People seem to think you’re all about winning.

A. Yes, I think people got accustomed to Kim Ga-young winning the event. Maybe this is because I have taken the No. 1 ranking in the seniors division since I was a middle school student. I only get praise from fans when I win the event.

Can you tell us more about your victories?

I first won the World Championship in 2004 and became a top-ranked player in 2007. Since then, I think I have never been outside the top five. I have so many trophies, but since there isn’t enough space in my house to keep all of them, I only keep a few of them on my awards cabinet.

How much do you practice?

Because of the tight tournament schedule, I do my practice in short bursts. Generally, I practice 10 hours straight. One time, I even fainted during practice, but this was my style from the early days. I also work out daily when I have time.

Can you tell us about your “Little Witch” nickname?

It was the nickname Taiwanese players gave me when I was playing in international events as a high school student. I think players were surprised because this little girl was playing with a face showing some malice. As they found out how much I practiced, I think the witch nickname was confirmed. In the U.S., I was called “Little Devil Girl.”

Can you tell us how much money you make?

It really fluctuates year by year depending on my results in events. But from five years ago, my earnings are getting stable. Including salary, prize money and sponsorship, I’m earning about 100 million won ($87,000) to 200 million won a year.

Do you think you were a talented pool player in your childhood?

When I was a sixth grader, my level was 500 points for four-ball Korean-style billiards. I was in ecstasy as I watched adults lose to this small kid. As I kept getting better, I just kept practicing playing pool. In my high school days, I was so busy training and playing matches I never went on school trips.

Why did you decide to go to Taiwan after your high school graduation?

Back then, I was the top player in Korea. But when I played in international tournaments, it was difficult for me to pass the second round. I knew I had to play against players who were better than me. Back then, Taiwan’s Shin Mei Lu was the No. 1 player. She was an idol to me. I saw her plays, and in my mind, I wanted to play against her and collect a win. That’s why I chose Taiwan.

How was your life in Taiwan?

In Taiwan, I lived in a cheap motel. Since I didn’t like to stay there, I slept only four hours and focused on training. That’s why my skills got better and in just six months, I was able to beat my idol Lu. In 2003, I moved to the United States. Within a year, I was able to reach the runner-up position at the U.S. Open nine-ball championship and went on to win the World Championship in 2004.

Do you regret not having a college life?

There is no regret. I didn’t go to college because I was playing pool, which I like most. In fact, I always had a boyfriend, so I didn’t envy college students who were dating fellow male students (laughs). In 2011, I entered Korea National Sport University and graduated last month. It was fun to have a college life with students 10 years younger than me, though I had to buy dinners for a lot for them (laughs).

What have you learned from living overseas?

It was a turning point for my pool life. Honestly, I was a player with vanity because I was the best in Korea. I was arrogant because I even beat the world’s best player, Jeanette Lee, when I was young. Before I went overseas, I consoled myself when I lost by thinking, “I’m alright because I’m young,” instead of analyzing what went wrong in the match. That’s why I couldn’t progress. But overseas, I learned from veterans. They tried to learn from players, even if they had lower rankings. They were humble. It was the time that I looked back on myself.

Is it true you were disappointed by fans paying more attention to pretty players?

When I came back to Korea in 2011, there was a trend that pretty players were getting more spotlight. I thought, “I’m the world No.1, and what’s with the pretty face?” I can accept people paying attention to beauty, but I was sad that people couldn’t pay attention to my skills. It took me a long time to accept the reality. Now, I’m fine.