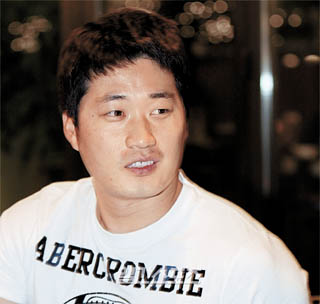 Kim Dong-wook, head of Sports Intelligence, said it is hoping to match Oh with a team in the United States. Oh’s contract with the Tigers ends this season. The Tigers have already been eliminated from the Nippon Professional Baseball (NPB) postseason after losing to the Yomiuri Giants.

In an interview with Ilgan Sports, an affiliate of the Korea JoongAng Daily, last month, the 33-year-old right-hander hinted he is not afraid to have a new challenge in his career.

Oh has asked his agency to take charge of his transfer, but he has reportedly asked them to consider the MLB as their first option.

“We first needed to talk with Hanshin, but our focus is on playing in the United States,” Kim said.

After conquering the Korea Baseball Organization (KBO), Oh signed with the Tigers in 2014 with the best deal among Koreans.

Oh, who has the most saves in KBO history, went 2-4 and 39 saves with a 1.76 ERA in 64 games to win the best closer title for the Central League of the NPB and became the foreign pitcher with the most saves in Tigers history.

For this season, Oh went 2-3 and 41 saves with a 2.73 ERA in 63 games. Although he did not win the Japan Series title in his stint with the Tigers, he set the most saves record for a Korean pitcher and tied the NPB single-season record for most saves by a foreign pitcher.

“Oh has accomplished a lot of things in Japan,” Kim said. “Now, it’s a new start.”

Oh, the five-time saves king in the KBO, can sign with a big league team as a free agent if he decides not to sign a new contract with the Tigers. Kim said some American clubs have already made inquiries.

“What’s important is whether the club can offer the environment where Oh can show his best ability,” Kim said.

Oh, who made his pro debut with the Samsung Lions in 2005, will become the fourth Korean player to play in the MLB after experiencing the pro leagues of both Korea and Japan. All three Korean players before Oh were also closing pitchers.

Koo Dae-sung, who still plays with the Sydney Blue Sox in Australia, signed with the New York Mets in 2005 after playing for the Orix BlueWave, while Lee Sang-hoon went to the Boston Red Sox in 2000 after playing for the Chunichi Dragons. Most recently, Samsung Lions closer Lim Chang-yong was with the Chicago Cubs after he played for the Yakult Swallows in Japan.

“We also consider that [the move] can’t be delayed anymore [for Oh to play in the U.S.],” said Kim.

Meanwhile, Lotte Giants outfielder Son Ah-seop has also declared he is looking to sign with MLB clubs through the posting system. Players who have played a full seven seasons in the KBO can ask to be posted.

Son, 27, is one of the designated hitters in the league, marking a batting average above .300 for six straight years. The four-time Golden Glove winner has a career batting average of .323, 413 RBIs, .398 on-base percentage and .462 slugging percentage in his 853 games in the KBO.