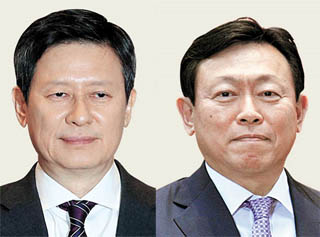 Shin Dong-joo, the losing sibling in the family feud to control Lotte Group, made his most aggressive countermove yet against younger brother Shin Dong-bin by having him tossed off the board of directors of a Japan-based company that holds the largest stake in Lotte Holdings of Japan.

At a shareholders meeting and subsequent board meeting in Tokyo Wednesday morning, elder brother Shin Dong-joo, who was once vice chairman of Lotte Holdings, had his younger brother removed as a director of Kojyunsya, a Japan-based packaging company.

Lotte Holdings is the de facto holding company of Lotte Group, and Kojyunsya, which is not public, has a 28.1 percent stake in Lotte Holdings.

Shin Dong-joo owned 50 percent of Kojyunsya until recently, when he bought a single share from his 92-year-old father, Shin Kyuk-ho, Lotte’s founder and former chairman. The purchase raised his stake to a majority.

Younger brother Shin Dong-bin, who had himself made Lotte Group chairman in August, holds a 38.8 percent stake in Kojyunsya.

The changes at the obscure, private Tokyo company came six days after the vanquished eldest brother filed lawsuits against his younger brother over his control of Lotte Holdings. He said he had launched legal proceedings in both Japan and Korea to nullify the decision in August to dismiss their father from the board of the Japanese holding company.

Shin Dong-joo, who is more fluent in Japanese than Korean, told reporters in Tokyo that Jung Hye-won, managing director of SDJ Corporation, which is handling Shin’s media relations, would read a statement on his behalf.

Shin founded SDJ Corporation - its name comes from his initials - on Oct. 1 in Seoul to serve as his Korean base. He formerly kept a low business profile in Korea. His father had a policy of dividing the brothers’ roles by region - Korea for the younger Shin and Japan for the older.

Spokesperson Jung noted that Wednesday’s actions proceeded “lawfully and fairly.” She said Isobe Tetsu, founder Shin’s secretary for over 20 years, replaced Shin Dong-bin on the board of the Japanese packaging company.

“Shin Dong-joo personally holds a 1.62 percent stake in Lotte Holdings, and he has now acquired the position of top shareholder of Lotte Holdings with a governing stake of 30 percent,” Jung said. “With this qualification, I [Shin Dong-joo] intend to fix various problems at Lotte Group and proceed with corporate reform.”

It remains to be seen whether his drive to capture the Lotte chairmanship will work.

Lotte Group said in a statement following the announcement from Tokyo that stripping Shin Dong-bin of the director position at Kojyunsya will have “no impact whatsoever on his management control over Lotte Group.

“Kojyunsya owns only 28.1 percent of Lotte Holdings in Japan, which is unable to influence the management rights to Lotte Group,” the statement said. “The decision made by the Lotte Holdings shareholders’ meeting on Aug. 17 was already based on such a stake-holding structure.”

Lotte contends that contrary to the elder brother’s claim, Shin Dong-bin effectively controls more than a 50 percent stake in Lotte Holdings when shares held by allies are included. His personal ownership is only 1.4 percent.