A scene overlooking the Cheongna International District, where commercial-use buildings are lined up next to residential apartments alongside an artificial canal 3.6 kilometers (2.2 miles) long. Provided by IS Dongseo

With construction started in 2006, the Cheongna International District has recently become a hotspot for real estate hunters. The 1,782-square-meter (2,131-square-yard) site is home to apartments of various sizes. Some of the small-sized units’ prices have surged more than 100 million won ($88,000) past their initial sales prices, boosted by homebuyers’ high demand leading to a lottery for the apartments still available.

Among various international business districts, the Cheongna area has gained popularity in part because of its location close to a subway station.

Well County, one of the apartment complexes in the region, is one of the most sought-after properties. An 84-square-meter unit is currently selling for 370 million won, more than 100 million won past its initial price. 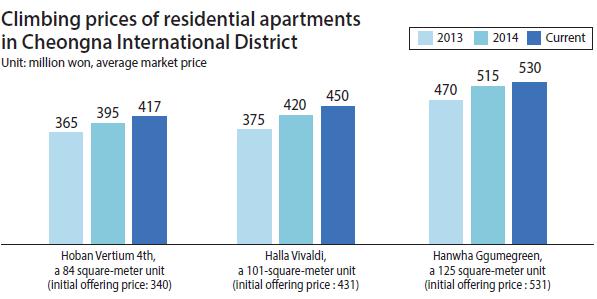 Competition for buying a unit in the area is tough. When Jeil Construction Corporation unveiled the Jeil Punggyeongchae complex in May, there was an average 2.7 applications per apartment, with the ratio reaching 102 to 1 for the most popular units.

Data from the Incheon city government showed the total population living in Cheongna at 81,270 as of end of July, roughly 90 percent of the city government’s target.

“Considering two complexes that are still not open for market, the area has effectively accommodated 100 percent the city’s intended residents,” said Jang Seok-hun, a local property broker. “With infrastructure launched, the perception that the area was inconvenient to live in is rapidly receding.”

In fact, for the past two years, an international school and a foreigner-friendly hospital have been built, as well as some hypermarkets and an elementary school, a middle school and a high school.

An artificial canal 3.6 kilometers (2.2 miles) long also offers a scenic view for residents. The area is located about half an hour by car from the western business district of Yeouido in Seoul and about half an hour from Seoul Station by the Airport Express subway line.

Real estate analysts forecast the popularity of the region to continue for a while, as several large-scale construction projects are also ongoing in the region, such as the 247,749-square-meter financial center by Hana Financial Group which will open in June. Next year, Cha Biomedical Group, a leading hospital in the country, is planning to construct a comprehensive medical services complex in the district.

“With a comfortable living environment, if several pieces of infrastructure are added, the influx of new residents will accelerate,” said Park Won-gab, a real estate analyst at KB Kookmin Bank.