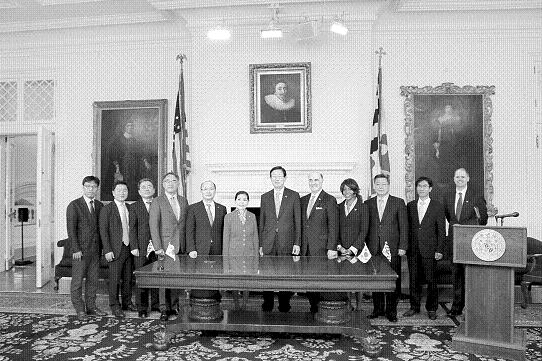 Yumi Hogan, sixth from left, the Korean-American wife of Maryland Gov. Larry Hogan; Korea Electric Power Corporation CEO Cho Hwan-eik, seventh from left; Maryland Secretary of Commerce Michael Gill, eighth from left; and other officials from Kepco and the Maryland state government, pose after signing an agreement on Thursday local time in Annapolis. Kepco reached a deal with the Maryland state government to work on joint businesses in new energy, ranging from smart grid and energy storage systems to the construction of electric vehicle charging infrastructure. Provided by Kepco