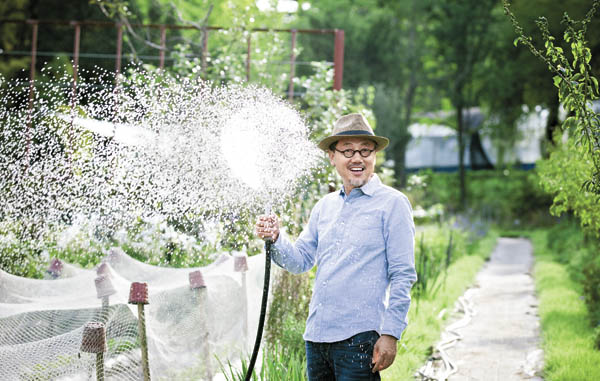 Architect Choi Si-young, who has recently been incorporating farming life into his designs, waters crops at his farm in Gwangju,Gyeonggi. [KWON HYUK-JAE]

Architect Choi Si-young has a unique portfolio compared to other architects in Korea. He spent the past three years showing that farms can be beautiful and harmoniously incorporated into architecture.

Choi, who is known for his interior designs in many well-known residential and commercial complexes, such as Tower Palace in Dogok-dong, southern Seoul, has spent much of his time lately at his farm in Gwangju, Gyeonggi.

When the JoongAng Ilbo visited his farm recently, the architect looked tan from working outside all day and had a bottle of beer in his hand. He was taking a photo of a new building that was finished the night before.

The farm measures about 6,611 square meters (1.6 acres) in size. He inherited it from his father, but he didn’t try to make any use of the land for about 15 years because it was land that is protected for water resources. 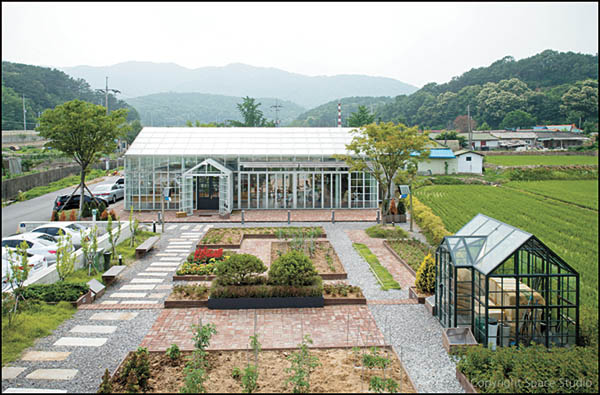 Choi built a cafe called Alex the Coffee in the middle of rice paddies in Yongin, Gyeonggi. [NAMGUNG SEON]

But he turned to it again when he grew exhausted from his daily life. Choi was getting tired after 30 years of construction and design and wanted to take a break from the fast-paced work schedule.

What really sparked his interest in farming was the Echigo-Tsumari Art Triennale held in Niigata Prefecture, Japan. The remote area, in which mostly elderly people reside after all the young ones left for the city, became the center of attention when around 150 artists from around the world traveled there to hold the art festival. Some artists set up their works in the middle of rice paddies, while others designed packages to contain rice.

“I learned what an architect or designer needs to do in the future, as if I was destined to know,” Choi said.

At a glance, his farm looks like a flower garden, as he planted many flowers in between rows of cabbages, peppers and blueberry bushes.

“I wanted to do ‘space telling’ by designing a farm that looks pretty to your eyes as well, even after all the crops are harvested,” Choi said.

“‘Space telling is telling a story through space, and I believe well-designed spaces house eternal possibilities, and such well-managed farms can become cultural spots in the rural areas or places to hold wedding ceremonies or exhibitions.”

He said the trend of running small farms is not only popular among designers but by local chefs as well.

“I have told people that the era of [celebrity] chefs would come about five or six years ago, but the time came earlier than expected,” Choi said.

He said the next trend will be chefs who garden, saying that a small garden is like “a natural refrigerator.”

“What about chefs who can make excellent carrot dishes and who use what they harvest from a garden right next to the restaurant? Many well-known chefs say that they want their own farms,” Choi said.

In support of such a trend, his recent designs center around such small farms. He designed a coffee shop called Alex the Coffee in Yongin, Gyeonggi, that looks like a greenhouse and is located in the middle of rice paddies. Visitors rave about the beautiful views of the surrounding fields, and it has become a hot spot for bloggers.

“Neighbors didn’t even complain about [the construction noise] as they thought a greenhouse was being built,” Choi said.

Encouraged by the success, he is now taking on another challenge by making a nature-friendly restaurant in Yeouido, western Seoul. On top of the Federation of Korean Industries building on the 50th and 51st floors, Choi is constructing a garden-like restaurant along with a rooftop garden.

Choi goes to his own farm twice a week. The veteran architect battles weeds and gets anxious about plants that don’t bloom flowers or crops being eaten by bugs and other animals.

He says he named his farm “Farmer’s Daddy,” as he hopes his youngest son will be a gardener.