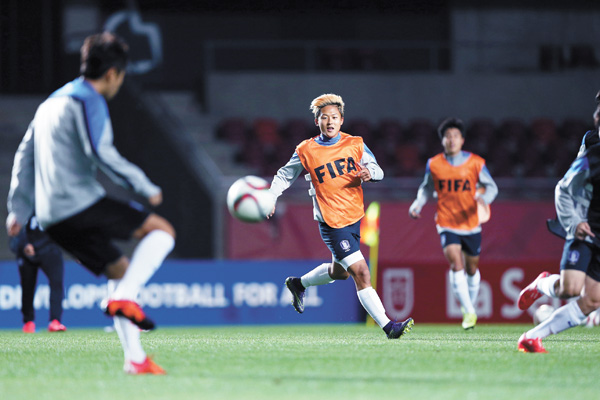 SEOUL, South Korea - South Korea’s shock win over Brazil in the Under-17 Soccer World Cup on Saturday may have been as much a case of the players not realizing they were the underdogs as it was a display of self-belief.

Just as Japan impressed the rugby world with their poise and confidence in their remarkable win over powerhouse South Africa at the Rugby World Cup last week, South Korea was not content to rest on its 79th minute goal against Brazil and continued to press forward to extend their lead in Chile.

South Korea’s display of pace and skill at times looked more like the traditional Brazilian style of play than their Brazilian opponents were playing.

The fearless attitude of the South Korean under-17s is something the senior players would do well to remember. At the 2014 World Cup in Brazil, Asia’s four teams returned home without a win between them in 12 games.

Japan-based, U.S.-born Tom Byer, an Asian youth development expert and football consultant to the Chinese Ministry of Education, says the ignorance of youth can be blissful.

“There is less of an intimidation factor involved as these are 16-year-old kids who aren’t in as much awe as the senior players are. So there is way less pressure at this age,” Byer said.

“Also, the Under-17 Tournament is held every two years instead of four so these countries are always working toward qualification even in the off years,” he added. “Korean players are extremely technical and motivation is always high, especially when a medal can bring exemption from military duty.”

Lee Seung-woo, who plays for Barcelona’s B team and is widely regarded as one of Asia’s brightest young talents, impressed against Brazil. The 17-year-old has been criticized in South Korea for a perceived “cockiness” that was evident in July when he returned home to represent his country in a friendly tournament.

The striker, sporting dyed blond hair, was openly unhappy at being substituted by coach Choi Jin-cheul, a reaction unusual in South Korea where players are expected to bow to their teammates and coach when they’re taken off. If Lee is a little arrogant, it is perhaps the kind of quality that South Korea needs.

“I know that in Korea I’ve been told that I lack maturity and physicality,” Lee -- who was at the center of Barcelona’s transfer ban in 2014 as the Spanish giant was found to have breached FIFA regulation when signing youth players -- told Korean media after the game. “But Barcelona just promoted me to their professional team. Over there, they see me differently, so I thank them.”

Lee was again taken off late in the win over Brazil, but this seemed to be a precautionary measure by coach Choi.

“Some people say Lee is not a good team-player but this is not true,” said Choi earlier this month. “He is just very lively and though he can be a little greedy, he is an excellent player.”

South Korea takes on Guinea on Wednesday morning (Korean time) with its home fans now expected to be watching with more anticipation. With a win, the young Taeguk Warriors will confirm a place in the knockout stage with a game to spare.

It could be that a more important lesson has already gone out to Asia - a little more self-belief and a little less respect given to others can go a long way. AP