With decisive KLPGA event ahead, In-bee stays in Korea

With decisive KLPGA event ahead, In-bee stays in Korea 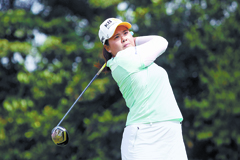 Although Park In-bee has achieved a career Grand Slam and become the world’s top-ranked golfer, there is one thing she still hasn’t experienced: winning an event at home.

She lost another opportunity to do so last week, tying for 15th at the LPGA KEB-Hana Bank Championship in Incheon, the only LPGA Tour event held in Korea.

Although many LPGA Tour players subsequently departed to Taiwan for the Fubon LPGA Taiwan Championship, Park stayed home to compete in the KB Financial Star Championship.

The last major tournament of this season’s KLPGA Tour starts today at the Namchon Country Club in Gwangju, Gyeonggi, with 120 golfers competing for a purse totaling 700 million won ($616,000). 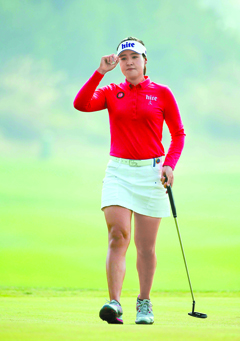 
Park’s decision to stay home comes at a time when her top ranking in the LPGA Tour is being closely chased by second-ranked Lydia Ko.

Ko, 18, tied for fourth at the LPGA KEB-Hana Bank Championship last week. She has 12.42 points in the world rankings, which places her only 0.27 points behind Park. In Rolex Player of the Year points, the Korean-born Kiwi is tied with Park at 243 points. In prize money ranking and scoring average, Ko has already surpassed Park.

There are only four events remaining to end the LPGA Tour season, and Park is also defending champion of the Fubon LPGA Taiwan Championship.

Despite the circumstances, Park decided to play in the KB Financial Star Championship, which will be her second KLPGA Tour event this year after the Jeju Samdasoo Masters in August.

The event is hosted by her sponsor, KB Financial Group, but it has also historically been the home tournament in which she has performed the best.

Since 2008, Park has participated in 14 events in Korea but has never won. However, Park has four runner-up finishes in the KLPGA Tour, and two of them were at the KB Financial Star Championship. She finished second in the last two years, losing to Lee Seung-hyun by two strokes in 2013 and Kim Hyo-joo by a stroke in 2014.

But the 27-year-old, who has four wins in the LPGA Tour this season, said last week that she’s not thinking about winning. Instead, she just wants to wrap up the season by enjoying the sport.

“For the last two or three years, I have been thinking about winning titles, but the results weren’t that good because I was placing too much emphasis on [winning],” she said last week .”This year, I changed my mindset to focus on finishing the season with joy.”

Supporting her sponsor and taking another shot at a first victory in Korea are important motivations for Park. But for KLPGA Tour golfers in general, the event is important because various titles are up for stake.

With only four events remaining in the KLPGA Tour season, the race is tight for the prize money ranking, MVP and Rookie of the Year awards. Since the major tournament gives more award points than other events, top local golfers, including Chun In-gee and Park Sung-hyun - with whom Park is paired for the event - are hoping for their best performances. 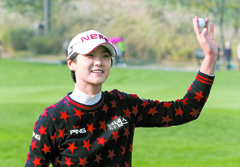 Chun currently tops in prize money ranking, MVP points and average score. But the 21-year-old, who won the U.S Women’s Open in July, is closely chased in all three categories.

In prize money, Chun has collected more than 770 million won in her four wins on the tour this season, but Park is behind her by just 133 million won. Since the winner of this event gets 140 million won, Chun could see her title slip away.
Chun has reason to be worried because Park has been hot in recent weeks. At the LPGA KEB-Hana Bank Championship, Park tied for second in her first LPGA event. She has won three events this season, two of which came in the last four events.

“The game has reached the upper level right now, and I look forward to winning the remaining events,” Park said. “If I had to choose, I want to win this major tournament.”

With her long-range drive, Park surprised the LPGA Tour’s renowned power hitters Michelle Wie and Lexi Thompson. Both played with Park in the first round of the LPGA KEB-Hana Bank Championship, in which the 22-year-old Korean set the course record of 10-under 62.

After all, she’s top-ranked in average driving distance in the KLPGA Tour at 256.72 yards.

“There are short par-5 holes, in which I can try to land on the green in two shots,” Park said. “I think I have the advantage on this course.”

For Lee Jung-min, who is third in prize money rankings with more than 596 million won, this event is also important. The 23-year-old has 361 MVP points and an average score of 70.86 in the KLPGA Tour, which is just four points and 0.43, respectively, behind the leader Chun.