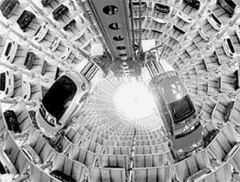 The new Beetle Cabrio, left, and a Golf VII photographed in the elevators of the storage of German Volkswagen car producer in Wolfsburg, northern Germany, Match 14, 2013.

The September sales numbers are in, and Volkswagen has shown healthy growth in Europe. It was easy to assume the German carmaker’s reputation would be heavily affected by its cheating on emissions tests, but car buyers appear to be defying that assumption, aided by VW’s generous discounts. Perhaps Warren Buffett’s adage, “It takes 20 years to build a reputation and five minutes to ruin it,” doesn’t really apply to the formidable reputation German engineers enjoy.

In September, new car registrations in Europe increased 9.8 percent compared with September 2014. VW unit sales grew 8.3 percent, slower than the market in general, but Audi and Skoda sales grew 10 percent each, and Porsche’s sales increased by 50 percent (they’re up by a third in the first nine months of the year, so this is not a fluke).

These data compare favorably to VW’s performance in the United States, where its sales were flat in September while other brands - except Tesla - showed fast growth. But then in the U.S., the German manufacturer had to quarantine a quarter of its inventory. That its sales didn’t drop under these circumstances is an indication of serious consumer loyalty.

In a harshly competitive market, VW is doing all it can to support that loyalty with big discounts and dealer incentives. In the United States, it’s paying dealers $1,500 per car and giving them money for “discretionary purposes,” as well as offering $2,000 rebates to current VW owners. In Germany, according to Ferdinand Dudenhoffer, who studies the auto industry at the University of Duisburg-Essen, big Internet dealers were offering the VW Golf with 21 percent off the list price in September.

The discounts are meant to show competitors that they won’t be allowed to take market share easily. They will cut into the company’s margins, but VW can afford it for now. Its margins are better than those of U.S. car manufacturers.

It’s probably too early to say with certainty that VW sales are going to hold up. The scandal only broke out in mid-September, so only half that month’s sales were affected, and heavy discounting will become harder when VW has to shoulder the costs of recalling and fixing millions of diesel cars. Credit Suisse has estimated the total cost of the emissions scandal at $87 billion - eight times last year’s net income for VW and 60 percent more than BP’s cost of dealing with the Gulf of Mexico spill.

That estimate, however, comes from the financial world, which has panicked about Volkswagen since its emissions cheating came out. Its stock price is down 40 percent in the last month. Consumers are turning out to be more lenient. If VW’s brand and all of the group’s sub-brands were ruined in their eyes, September sales would have gone down despite the discounts. A car is a serious purchase, and if there were any stigma attached to owning a VW or an Audi, a couple of thousand dollars’ savings wouldn’t help erase it. Besides, VW buyers will drive the cars for years to come; if they’re willing to purchase them now, it suggests they don’t have serious concerns about the quality of the product.

A recent Kelley Blue Book survey of U.S. consumers showed 53 percent of them now say they have “complete” or “general” mistrust of Volkswagen. Researchers into ethical consumption, however, are familiar with a phenomenon they call an “intention-behavior gap.” People profess certain principles that are supposed to guide their purchases, but they don’t always act on them in reality.

Earlier this month, Interbrand put out the latest version of its Best Global Brands list, factoring in the emissions scandal. Volkswagen’s brand value would have risen by 10 percent had the cheating not come out; instead it dropped by 9 percent. Yet Interbrand calculates it’s still worth $12.5 billion, the 35th most expensive brand in the world. VW is higher on the list than Ford, Nissan or Land Rover.

The strong sales of BMW and Daimler cars last month also show that VW’s problem hasn’t affected other German carmakers. At the beginning of the scandal, there were concerns it would hurt the “made in Germany” brand. That’s not happening, and both BMW and Daimler’s stocks have recovered their September losses.

In the eyes of the average consumer, cheating a regulator on emissions will never be as serious an offense as, for example, covering up defects that could endanger their lives. VW’s new chief executive, Matthias Mueller, was probably right when he told staff on Thursday that the firm will have a chance to shine again in two or three years’ time, when the recalls are over, if it can continue to innovate rather than turn inward. Now that the company’s diesel program has been set back, Mueller wants to concentrate on electric vehicles, and given VW’s sharper focus on protecting its market share, competitors in that field, such as the Japanese companies, BMW and Tesla, shouldn’t write it off.

The author is a Berlin-based Bloomberg View columnist.