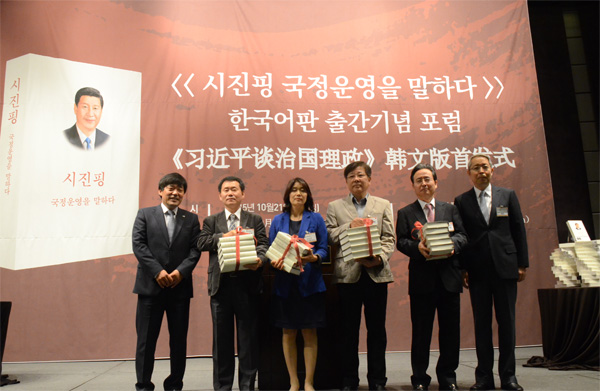 The Korean-language version of “Xi Jinping: The Governance of China,” a book by the Chinese president containing his major speeches and letters between 2012 and 2014, launched Wednesday at a forum held at the Westin Chosun Hotel in central Seoul. Officials from both countries attended the event. [CHINA CULTURAL CENTER]

A book containing Chinese President Xi Jinping’s major speeches and letters was released in Korean at a forum held in Seoul on Wednesday, ahead of an upcoming trilateral with the leaders of Korea, China and Japan.

The book “Xi Jinping, The Governance of China,” the first to be published by a sitting Chinese president, compiles 79 of his major speeches, talks, interviews and correspondence from November 2012 to June 2014, along with explanatory notes.

The forum to launch the Korean-language version of the book was attended by some 200 officials from both countries, including Tuo Zhen, 56, the deputy head of the Central Publicity Department of the Communist Party of China, and Chinese Ambassador to South Korea Qiu Guohong, at the Westin Chosun Hotel in central Seoul.

“China and Korea are harmoniously advancing a situation of political mutual trust, economic cooperation and trade and people-to-people exchanges,” Tuo said in his opening speech. “We have entered the best period in our relationship.”

Those remarks come amid preparation for the first trilateral talks to include Chinese Premier Li Keqiang, Japanese Prime Minister Shinzo Abe and President Park Geun-hye, expected to be held at the end of the month or early November.

Tuo also said the book was meant to enable a “greater understanding of the ideology to develop international society and China, of China’s domestic and foreign policy and of Chinese reforms and dreams.”

“China and Korea,” he added, “are geographically near and also share many similarities in the field of humanities, and are also very complementary economically.”

Before taking this role at the party’s powerful propaganda department, Tuo worked as vice-president at the state-run Xinhua News Agency.

The 564-page book, released by Korean publisher Mirae N, contains 45 photographs of the president, from his days as a student at Tsinghua University to the present. The book’s 18 chapters cover a range of topics, including Chinese-style socialism, national defense and economic development.

The Korean publisher signed a deal with the distributor, China International Book Trading Corporation, at a book fair in June in New York.

Over 5.2 million copies have currently been distributed to 100 countries globally, the publisher said. It is already published in English, French, Russian, Arabic, Spanish, Portuguese, German and Japanese.