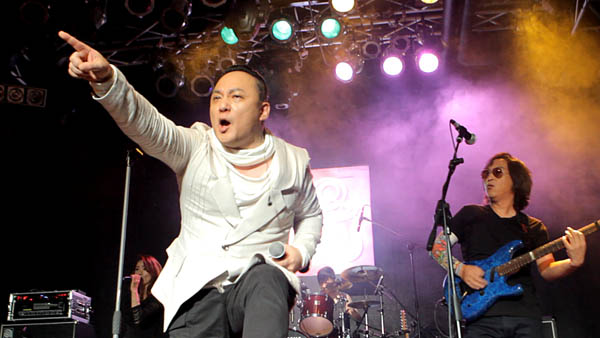 The late musician Shin Hae-chul (1968-2014) was a versatile and experimental singer. Tuesday is the first anniversary of the musician’s death. [JOONGANG ILBO]

The impending first anniversary of the death of musician Shin Hae-chul (1968-2014) is evoking an outpouring of emotion. Shin’s fellow musicians, his fans and TV shows are each remembering him in their own ways.

Shin passed away on Oct. 27, 2014, due to medical malpractice after undergoing abdominal surgery.

Hundreds and thousands of people visited the Utopia Mourning Shelter in Anseong, Gyeonggi, where Shin’s cremated remains were placed on Sunday, and paid condolences to the late musician at an official mourning ceremony titled “Here I Stand for You” along with Shin’s family.

“Here I Stand for You” was one of Shin’s hit songs.

Some fans of the late singer who could not make it to Anseong gathered at Uncle Joe Bar, located near Hongik University in western Seoul, on Saturday and sang along to Shin’s songs.

Cheolgigun, an official Shin fan club, will hold a tribute concert on Nov.1 at 5 p.m. at the Dream Forest, located in Beon-dong, Gangbuk District, northern Seoul. Shin spent his childhood in that neighborhood.

Popular TV shows are also paying their respects to the late musician, who was often referred to as “Mawang,” or king of demons.

“Hidden Singer” on JTBC remembered the singer in a special way on Saturday. On the show singers and their impersonators compete behind screens to see who can get the most votes.

The singers and impersonators perform a song, taking turns singing each measure. After each round, the audience and celebrity guests vote on who they believe is the real singer.

As for Saturday’s episode featuring Shin, however, it took longer to prepare than usual.

“We had to make viewers believe Shin was singing behind the screen along with his impersonators,” said chief producer Cho Seung-wook. “In order to do that, we had to find music files of Shin that do not involve instrumental accompaniment, and that was the toughest job.” 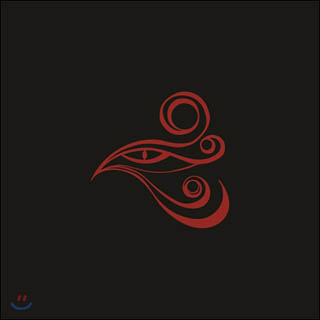 A special LP is being released on Tuesday to mark the anniversary. [KCA ENTERTAINMENT]

According to Cho, many of Shin’s close friends, like singer Kim Jong-seo and guitarist Shin Dae-chul, came to the shooting, saying they don’t want to remember Shin with tears.

“They said if Shin were alive, he wouldn’t want the show become soppy,” Cho added. “So they shared fun anecdotes about him. A lot of emotions came and went while shooting the episode.” 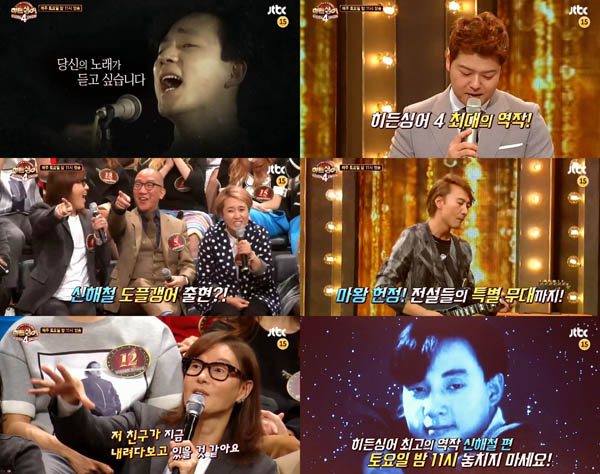 Various TV shows are paying their respects to the late musician. On JTBC’s “Hidden Singer,” musician friends of Shin got together at the studio and talked about their longtime friend and listened to performances of Shin’s songs. [JTBC]

Another TV show, “Immortal Songs” on KBS2, aired a special episode on Saturday featuring Shin’s songs. Singers like Tei, K.Will and Ha Dong-kyun reinterpreted Shin’s hits in their own styles.

The title track, “Welcome to the Real World,” was a collaboration between Shin and singer Lee Hyeon-seob, who is a backup vocalist for N.EX.T, Shin’s rock band.

When Shin passed away, the song was about 70 percent complete, but Sung Ji-hun, an engineer and a longtime friend of Shin, finished mixing and mastering the song.

“The song was composed and written by Shin in 2013 after he was watching TV news of a senior high schooler who took his own life because of [poor results from] the College Scholastic Ability Test,” Lee reportedly said.

The lyrics include: “Welcome to the real world. Don’t be afraid and don’t feel suffocated. Questions and choices are your own.”

Another commemorative music project is singer-songwriter and producer Yoon Jong-shin’s remake of “Confession.” Yoon said he will unveil a remake of the song, which was one of the tracks from Shin’s very first album released in 1990.

“Marking the first anniversary of Shin’s death, I worked on ‘Confession,’ which is my favorite song,” Yoon recently wrote on his Twitter account.

The remake song will be unveiled on Tuesday, and all proceeds will go to Shin’s family, Yoon added.

In Seoul, monument to the singer will be placed in Dream Forest. The city initially planned to unveil it on the first anniversary of the singer’s death but the project has been delayed.

“One of Shin’s fans designed the monument, but the design wasn’t appropriate to be installed inside the park,” said Lee Deok-ro, who is in charge of the project at the Seoul Metropolitan Government.

“In addition, the location of the monument also changed recently,” he said. “We hope to complete the project by Dec. 24, the anniversary of Shin’s debut.”

Shin’s fans crowdsourced the money for the monument, while the city offered the location free of charge as well as administrative assistance.

The city of Seongnam, Gyeonggi, announced a few days after the musician’s death that it would name a street after Shin. The singer’s studio was located in nearby Sunae-dong in Bundang, Gyeonggi. Seongnam is reviewing the possibility of dedicating a street to Shin.

Having debuted in 1988, Shin was one of the biggest names in Korean music history.

The singer, who had more than 30 studio albums under his belt, was also active in the music scene as a producer.

The experimental musician made a name for himself in rock music, but did not limit himself to just one genre. He dabbled in various styles of music, including ballads, techno and jazz.

Some of his biggest hits include “To You,” “Don’t Say Goodbye,” “You’re Deep Inside My Heart,” “Jazz Cafe” and “Don’t Pull a Sad Face.”

In addition, he was a romantic in his personal life. He reportedly proposed to his wife when she was battling cancer.

As the anniversary of his death approaches, legal battles between Shin’s family and Kang Se-hoon, the doctor who performed Shin’s surgery, are still ongoing, although the police determined the doctor is responsible for Shin’s sudden and unexpected death.

The police said that the direct cause of Shin’s death was cerebral hypoxia, or a reduction in the brain’s oxygen supply.