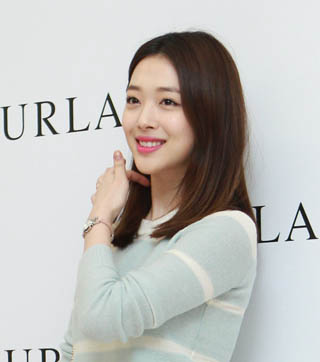 Sulli, a former member of the girl group f(x), backtracked Saturday after uploading a post promoting her singer friend IU rather than of her old band mates.

The 21-year-old musician uploaded a post onto her Instagram account early Saturday in which she wrote, “I can’t help falling in love. I love IU. I love all her songs but ‘Red Queen’ is the best among all the others. I can’t help but love her.”

Sulli and singer-songwriter IU, who recently released a mini album, are known to be close friends.

After the post went public, some K-pop fans criticized Sulli for promoting IU, rather than her former band mates in f(x).

Sulli went on to upload another post later that day, saying, “I also root for f(x). Ha ha ha,” with a promotional poster of the group’s upcoming album, set for release Tuesday.

Sulli left f(x) in August, and SM Entertainment, which represents the band, announced at the time that it had accepted the singer’s decision to take a break from music to focus on her acting.

F(x) will release its regular fourth album “4 Walls” on Tuesday with its remaining members.