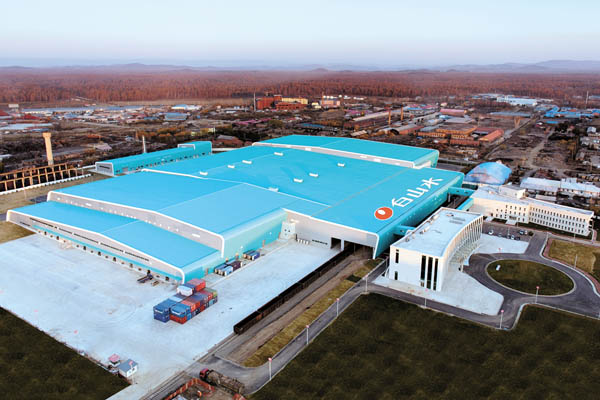 As the sales of sodas and other sugary beverages slow due to health concerns, demand for bottled water is on the rise.

Food maker Nongshim is one of the fastest-moving players in the growing business, and is looking to expand past its home turf by opening a water production facility in China.

With the capacity to produce 1 million tons of water per year, Nongshim’s plant in Yanbian, northeastern China, will produce the company’s Baeksansoo brand. The production is mainly intended for Chinese consumers, with 700,000 of the 1 million tons to be distributed in China, which boasts the world’s largest consumption of bottled water.

A ceremony to celebrate the completion of the building was held on Oct. 15, when trial operations began. The plant will be fully operational by the end of this month.

Nongshim is not currently a major manufacturer in China’s bottled water sector, which is dominated by local brands such as Ting Hsin International and Master Kong.

The Korean company, however, is hoping to make a dent in the market with its large investments and multiple production lines in the country.

The company’s expansion into China appears to stem from the country’s ever-rising demand for bottled water.

In 2013, the country overtook America as the largest market for bottled water by volume, according to Canadean, a research group.

But Nongshim’s interest is not solely focused on the overseas market.

Ahn said that the new facilities will make Nongshim the largest purveyor of mineral water products in Korea by volume, beating out top water brand Samdasoo.

Nongshim owned the rights to sell Samdasoo prior to 2012, but sold them to Kwang Dong Pharmaceutical.

Samdasoo, on the other hand, currently holds 40 percent of the bottled water market.