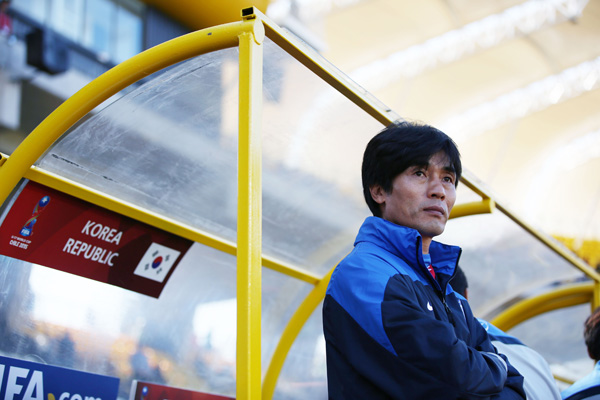 Choi Jin-cheul, Korea’s Under-17 men’s football team coach, at the Group B match against England in the FIFA U-17 World Cup in Chile on Saturday (Korean time). Korea faces Belgium on Thursday in the Round of 16. [korea football association]

COQUIMBO, Chile - As Korea prepares to meet Belgium in the final 16 of the FIFA U-17 World Cup on Thursday, coach Choi Jin-cheul has shown he is not afraid of using humor to break the ice with players.

Behind his usual poker face, the 44-year-old Choi’s leadership style is obviously paying off in Chile so far. Under his guidance, the young Taegeuk Warriors have easily topped Group B - where they were grouped with Brazil, Guinea and England - with two wins and one draw. Among 24 nations in the tournament, Korea is the only team that hasn’t conceded a goal in the group stage.

This is also the first time in the history of Korean men’s football that the team qualified in the group stage without conceding a goal.

Korea meets Belgium, who finished third in Group D and reached the knockout stage by wild card, in two days. The two teams have a shared win each in their two previous encounters in the U-17 World Cup.

Already making some history, Choi, who played in the 2002 and 2006 FIFA World Cup, said he will go for more. In an interview with the Joong
Ang Ilbo on Sunday - and in response to questions from his colleagues and coaches - Choi said he was confident the team can reach the semifinals.

Korea’s best performance to date in the U-17 World Cup was in 1987 and 2009, when they reached the quarterfinals.

The former Jeonbuk Hyundai Motors defender emphasized that regardless of the opponent, what’s important is that the team should always be prepared to play their best.

A. As I have watched these players grow for about five years, I think they have enough ability to go out in the world and play against top players. I know we were not that good in the Suwon Cup and friendlies in the United States, but I wasn’t worried because we were in the process of enhancing stamina during that time.

You were a player who sacrificed for the team. Do you also emphasize your style to players? (Kim Hyun-chul, Korea team doctor in the 2006 World Cup)

Young players in adolescence think a lot and get very sensitive. Through that time, what binds our team is the sacrifice. That’s our key word.

Yes I do, but my players aren’t laughing that much. These days, I try not to tell these jokes because I look at the kids, and they don’t think they’re funny anymore (laughs).

Your temper was well-known in the old days. How do you manage your temper now? (Kim Wook-heon, public relations manager at Jeonbuk)

When I was a player, I know I was hot-tempered. But after I became coach, I spent a lot of time with young players and noticed I had to somehow fix my character, but that wasn’t easy. I just waited and endured. It feels like I’m becoming a monk.

What is your coaching philosophy? (Choi Man-hee, former coach at Soongsil University)

I think my duty is to let our players show on the field what they practiced in training. I believe and emphasize to the players that you should do 120 percent in training in order to show 100 percent in the match.

You probably received good coaching offers from professional clubs. Why did you decide to start with the Korea Football Association? (Lee Woon-jae, teammate in the 2002 and 2006 World Cup)

No team was offering me a job (laughs). Honestly, I tried to study more about football. Since the KFA’s technical committee learned quickly about football from advanced football countries, I started from there, and I believe that decision was one of the best decisions in my life.

What do you want to achieve as a coach? (Choi Kang-hee, Jeonbuk coach)

Right now, I don’t think about other goals but to guide these 17-year-old players to keep building their football skills. I hope many players go to the senior national team one day. What’s important is that you should not be satisfied with the current situation. I hope many players will achieve their dreams and let this tournament serve as a good experience.

Have you ever felt the generation gap with young players?

I felt it numerous times. Our players listen to loud music when they’re on a bus arriving at the stadium just before the match. I still can’t understand why they listen and sing along (laughs). Back in my days, we just followed orders, whatever the coach says. Nowadays, players express their thoughts freely, which I somewhat envy and feel awkward about.

What did you learn from your coaches in the past?

Can the team reach the semifinals in this World Cup?

It’s impossible to achieve it by myself. With our players, coaching staff and other staff, it’s possible.