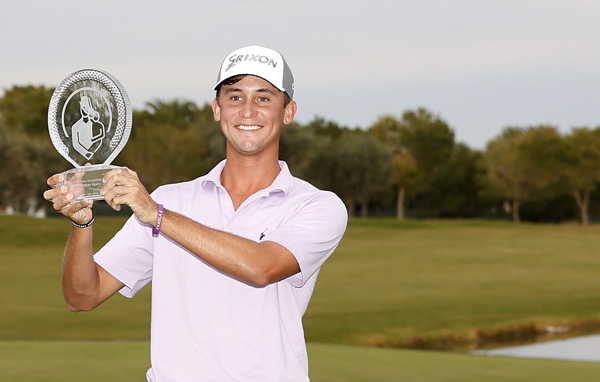 Smylie Kaufman became the second straight rookie to win Sunday when he closed with a 10-under 61 and then waited more than two hours to see if anyone could catch him in the Shriners Hospital for Children Open.

That felt tougher than any of the seven birdies and one eagle he made over the final 11 holes at the TPC Summerlin.

“I dodged a lot of bullets coming down the stretch with guys coming,” Kaufman said after his one-shot victory. “So much more stressful than on the course. So much worse. I felt like I was watching an LSU football game.”

Kevin Na played a role in both rookies winning.

Emiliano Grillo won the Frys.com Open last week, and Na made it easier on him in the second playoff hole at Silverado by taking bogey on the par-5 18th.

Kaufman, a 23-year-old from LSU, played the last four holes in 4 under. That included his 3-wood to 15 feet for eagle on the par-4 15th, and a 20-foot birdie putt on the final hole that turned out to be the winner. He started the final round seven shots behind and finished at 16-under 268.

Two other rookies, Brett Stegmaier (69) and Patton Kizzire (63), were part of a six-way tie for second.

Kaufman was on the range, on the phone and in a tent watching nervously on TV over the final hour. Cameron Tringale (66) and Jason Bohn (66) each had birdie putts to force a playoff, with Bohn’s 40-foot attempt narrowly missing.

The last chance belonged to Stegmaier, whose putt down the slope from the fringe stopped just short.

“It was pretty significantly downhill, so it was all speed,” said Stegmaier, also making his fifth PGA Tour start. “I mean, if the speed was off, the line was going to be off. I was probably a foot in the fringe, so I probably just held up that extra foot. I like to die my putts in the hole, and sometimes you run the risk of leaving it short.”

The victory sends Kaufman to the Augusta National next April for the Masters. He also gets in the PGA Championship, the Hyundai Tournament of Champions at Kapalua to start the new year and The Players Championship.

Na said he thought he could make his chip for birdie on the 17th except that it was sitting up on a patch of grass into the grain.

“And I just went under it,” Na said. “And with the Bermuda into the grain, I don’t know what happened.”