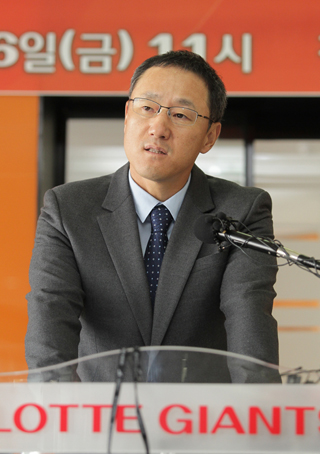 Three weeks ago, the Lotte Giants made Korea Baseball Organization (KBO) history - by becoming the first team to fire a manager at the end of the KBO League season.

After finishing eighth in league and failing to reach the postseason, the team axed manager Lee Jong-woon and appointed former SK Wyverns chief assistant coach Cho Won-woo in his place.

It was Lee’s first - and potentially last - season as a professional manager.

There were rumors that the Giants would hire their former manager Jerry Royster, who led the club from 2008 to 2010, but the Giants’ choice was Cho, who will be wearing the Giants uniform for the second time.

The 44-year-old previously served as outfield defense coach in 2011 and 2012. He later coached for the Doosan Bears and SK Wyverns, but this is the first time he will be managing a KBO club.

Cho is a fan favorite because, like the Giants, he hails from Busan. He made his pro debut in 1994, and played with teams like the Ssangbangwool Raiders, SK Wyverns and Hanwha Eagles until 2008. He left the field with a .288 batting average, 443 RBIs and 123 stolen bases in 1,368 games.

In his appointment speech on Oct. 16, Cho said that he will emphasize sacrifice, competitiveness and hard work with the Giants.

However, he’s had problems from the start. Giants players Son Ah-seop and Hwang Jae-gyun earlier this month declared they want to go to the Major League Baseball (MLB) through the posting system. The Giants eventually chose Son to negotiate first, but it will be a huge loss if either actually leaves the team.

Undaunted, the Giants are rebuilding step-by-step. On Oct. 20, the team announced it hired former Samsung Lions player Julio Franco as the batting coach for its minor league team. On Friday, the Giants appointed Kim Tae-kyun as chief assistant coach and signed six other new coaches for next season.

Q. How are you going to deal with people’s concern that you are a rookie manager?

A. I know what kind of team the Giants are, more than anyone else. I have big responsibilities and there are many things that the coaching staff needs to do. The first thing will be getting to know our players. I need to know their abilities and characteristics through the season wrap-up training, and will use that information to plan for next season. I’m a rookie manager. But I will open my ears and communicate with the team to show my commitment.

What went through your mind when you received the offer?

I had lots of thoughts when I got the offer, but later I thought this is a good opportunity. There should be no baseball coach who refuses a manager job. I will learn from what my senior managers have done and run the team with my plan to get good results.

Was there any discussion with the Giants before you received an offer?

No. Pro baseball is a small world. When I met officials from my former teams, they said, ‘You should come back,’ but there were no serious talks. For this season, I was only focusing on how to rebuild the Wyverns.

You graduated from Busan High School. How do you feel about going back to your hometown team?

I know how the Giants are perceived in Busan. It would be a lie if I didn’t consider that seriously [after I got the offer]. I thought a lot about whether I can really take the position. Fans in Busan and the pro baseball team in Busan are special.

Which manager impressed you most when you were a player?

Managers Kim Sung-keun [now with the Hanwha Eagles] and Kim In-sik [now with the national team] remain most in my memory. While I was pursuing a coaching career, manager Yang Seung-ho (formerly of the Giants) also helped me a lot. They not only managed the squad well, but communicated with players well, too.

How do you rate the Giants this season looking from outside?

I think Lee Jong-woon created a positive team atmosphere, but that wasn’t enough in some respects. I want to bring persistence and a combative spirit to the squad.

Don’t you think it’s difficult to manage the attitudes of players?

I will keep our principles straight. I will punish players who don’t obey basic rules. If a player doesn’t run to base with full energy or misses base covers or back-up plays in defense, I think those actions will ruin our team discipline.

What are the strengths and weaknesses of the Giants?

I think the Giants are not behind in slugging power and base running. This team also has good team chemistry thanks to manager Lee Jong-woon. But as a manager I realized the importance of pitching. It’s true that our backdoor has become weak.

After all, what’s important is getting results - right?

Yes, the most important thing is the result. If that’s not good, I have to quit. I’m ready for it. I will run the team according to my beliefs and principles.

The Giants already extended their contracts with three foreign players. Did you ask the club to sign or release the players already?

I hope the foreign players perform as they did this season. As for free agents, I know many good players are coming on the market, so I had to say to the team, “Don’t let those players leave our team”.

You spent two seasons with the Giants as a coach. How were the Giants back then?

Manager Yang Seung-ho believed in veteran pitchers and they managed to stabilize the mound. In terms of fielder positions, we were the best in the league. But of course, we didn’t win the Korean Series. As I look back, we didn’t have one ace pitcher to get the title.

What’s your goal as a manager?

That’s the most difficult question. I want to do as much as I can to the best of my ability, and I want to hold the manager job according to my principles for as long as possible. I’ll be evaluated after the season, so I just have do as well as possible.