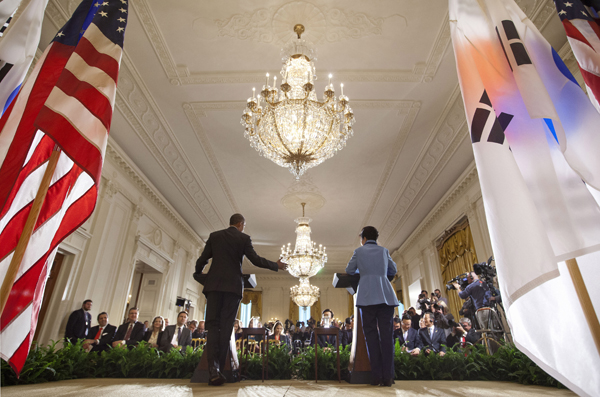 LOS ANGELES - During South Korean President Park Geun-hye’s recent visit to Washington, much focus was placed on U.S.-Korean diplomatic efforts to solve the problem of North Korea’s nuclear program. That is understandable, with tensions on the Korean peninsula often cited as a potentially destabilizing factor in the region’s continued economic growth and development.

Yet, in addition to exchanging foreign policy lessons and insights, the two leaders would also have done well by sharing ideas from America’s “Golden State.”

Korea techpreneurs, take note. During our recent Milken Institute Asia Summit held a few weeks back in Singapore, we shared several lessons from the U.S. state of California that Asia, including Korea, can build on to become a center of global invention and innovation.

As many Koreans and Korean-Americans who have traveled east to America know, California has been associated with the rewards of risk taking for decades, transforming backyard entrepreneurs into boardroom successes. Those California dreams of tech success have since gone global, capturing the imaginations of would-be tech entrepreneurs everywhere, whether in Seoul or Silicon Valley.

The recent rapid growth of investment in Asia’s tech sector, which according to Tech in Asia has risen from $6 billion to $45 billion in two years, provide a real opportunity. But the key for Korea is not just a rash of investment in initial public offerings and hot tech stocks, but for policy makers to foster an entrepreneurial ecosystem to create consistent levels of innovation.

Long-term success in tech typically includes the ability to not only improve on, but also to be the center of innovation. As increasing global competition and higher costs have brought several Asian countries into increased prominence in technology manufacturing, there is a strong desire by these nations also to take steps to nurture and boost their own home-grown innovations, risk-takers and successes.

So what lessons does California offer up to Korea? Here are three that we shared via the Straits Times during our second annual Milken Institute Asia Center-organized Asia Summit.

First, Korea must commit to developing great research universities - world-class institutes that will both train skilled individuals and advance the sharing of basic research and technology. According to the Shanghai Academic Ranking of World Universities, 2015, the United States is home to 16 of the top 20 world research universities.

In contrast, Asia’s highest-ranking research university is the University of Tokyo at No. 21; no non-Japanese university in Asia makes the top 100. This situation is changing, and California-based universities know that they too cannot rest on their laurels. In the interim, in their desire for international students, U.S. institutions, including many from California, also have educated some of the most successful entrepreneurs in Asia.

Second, Korea must embrace failure - not as an end, but as a means to success. Perhaps one of the most important lessons and strengths of California is the ability of its entrepreneurs to fail and try again. By some accounts, two-thirds of Silicon Valley startups do not last five years, failing ever to make it to an initial public offering (IPO) stage.

So, why do there continue to be so many startups? One reason is that, quite often, the same people who started one company are willing and able to try again. The ability to fail and learn is a significant factor in many companies’ successes in the state.

Even the more established firms, including Apple, Google and Intel among others, have thrived in part by continuing to take chances on small innovators, who then made it big. At one point, Yahoo’s single greatest windfall arguably came from its stake in China’s e-commerce leader, Alibaba, and its second greatest, perhaps its joint venture in Japan.

Third, Korea must move to innovate in the financing of start-ups. Risk taking cannot be left to entrepreneurs alone. By some accounts, up to 50 percent of all venture capital activity in the world flows through California. The access to significant investors at numerous different stages plays a significant role for California’s success in seeding tech innovation. Korea must take further steps to develop this resource, including policy and regulatory changes.

Asia’s family entrepreneurs are a great asset, including in Korea. But a key to growth will be recognizing that while venture capital funds do involve personal relationships, they also involve assessing and taking risks with relative strangers. This is a marked contrast to basing investment decisions primarily on the longstanding family relationships that often work in Asia. This distinction is important.

While many California companies would benefit from more long-term, patient investors, the reality is that before many California startup companies reach that stage, a significant funding gap exists. Into this so-called “Valley of Death” have entered a range of financing options and investors that go beyond “family and friends.” This too, Korea should welcome and embrace.

Even the most successful Asia start-ups have found it easier to access U.S. capital markets to further their expansion. Alibaba’s blockbuster New York Stock Exchange IPO is one example.

In the United States, there is a growing consensus on the value of promoting financial-market understanding and of working to expand access to capital, strengthen and deepen financial markets, and develop innovative financial solutions to the ongoing challenges to America’s sustained economic growth.

The tech sector remains a U.S. success story that has gone well beyond any Silicon Valley roots. In recent years, we have seen how technology companies have moved south from Silicon Valley to our own Santa Monica neighbor - now nicknamed Silicon Beach. That same reinvention and expansion of America’s tech industry now has people rightly California dreaming, on both sides of the Pacific, including understandably in Korea.