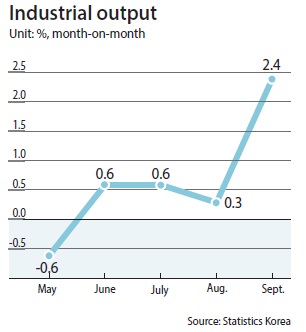 Total production output rose 2.4 percent month-on-month, monthly data from Statistics Korea showed on Friday, the fastest growth since March 2011, when it was 4 percent.

Output dipped below zero to minus 0.6 percent in May after the country was heavily hit by the outbreak of Middle East respiratory syndrome, which froze retail sales.

“Industrial production has grown for four straight months, signaling the rebound of the economy is widening,” said Kim Gwang-seop, a senior official at Statistics Korea.

Manufacturing, one of the major components, expanded 1.9 percent from a month earlier, while mining surged 6.8 percent.

Semiconductor production skyrocketed 17.2 percent thanks to the release of new smartphones. Automobile sales increased by 5 percent, which officials said came after the government reduced taxes for purchases of new vehicles.

Retail consumption climbed 0.5 percent from August, a slower pace than in August, despite the Chuseok holidays boosting sales of non-durable items by 2.3 percent. Sales of home appliances and clothes dropped by 1 percent, pushing down total retail sales.

“Consumption gained a lot in July and August, after it contracted too much in June because of the MERS outbreak,” said Kim. “We assume the weak growth in consumption in September was because the previous months grew too much.”

The Business Survey Index, a gauge of sentiment of Korean businessmen, also jumped in September in manufacturing and non-manufacturing industries, but they forecast little improvement for next month’s economy.

The measure - which surveyed a total of 1,798 manufacturers and 1,120 producers in non-manufacturing sector between Oct. 16 and 23 for their economic outlook based on their inventories, facilities, investments and workforces - gained 3 points to 71 from a month earlier.

If the index dips below 100, it means most believe Korea have a negative outlook. ?