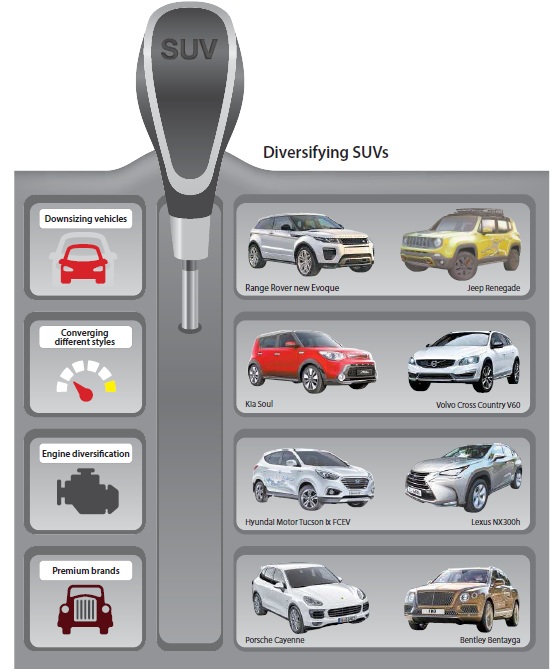 Sport utility vehicles, better known simply as SUVs, are attracting the “Best of British,” and a growing global audience in search of that ideal on-road, off-road adventure.

Two of the most renowned, classic names in the auto industry, Bentley and Jaguar, rolled out their SUVs recently at the Frankfurt motor show and understandably drew a huge crowd.

Visitors jostled to get a glimpse of Jaguar’s first SUV, the J-Pace, and Bentley, known for their rich, high-end sedans, joined the global SUV race with its Bentayga.

“As it is its first SUV, Bentley worked for more than three years in creating a vehicle with a distinctive character,” said Lee Sang-yup, Bentley’s senior designer. “We differentiated the SUV by adding the dynamic character of a coupe on the large luxury vehicle frame.” 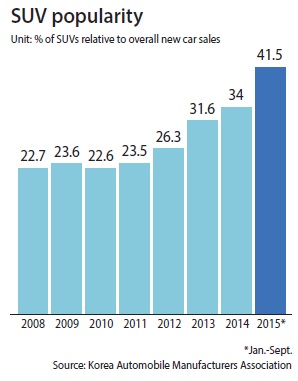 Kim Yong-geun, the Korea Automobile Manufacturers Association (KAMA) chairman, said the popularity of the SUV is not only changing the landscape of the automotive industry but also shaking up the brand identity of auto manufacturers.

As the popularity of SUVs in the global market continues to grow, automakers are creating SUVs that not only have strong performance but are also unique, whether downsizing designs to attract a younger and wider audience or focusing on the premium aspect of the vehicle.

SUVs are evolving. According to a study by KAMA, requested by the JoongAng Ilbo, 41.5 percent of cars purchased in the first nine months of this year were SUVs. This is the first time SUVs have accounted for more than 40 percent of all vehicle sales.

For five years starting in 2008, SUVs only accounted for 20 percent of new vehicles purchased. Its share rose to 30 percent in 2013 and remained at that level until last year.

Even when the automotive industry has been seeing a decline in sales, SUV sales have been rising continuously. And automobile manufacturers are noticing the growing popularity, as they are releasing new SUV versions in various configurations and designs.

One of the noticeable changes in recent years has been the overall size. Previously, SUVs were bulky and huge, but today, many of the SUVs rolling off the assembly line have become compact.

The changes were largely made to satisfy consumer preference for more practical cars that drive smoothly on the road, have high fuel economy and are low in price, rather than bulky, gas-guzzling SUVs.

On Oct. 22, Jaguar Land Rover Korea introduced a compact SUV, the new Range Rover Evoque. It is a face-lift on the automaker’s Evoque, which was first introduced in 2011 when the high-end SUV manufacturer decided to dominate the SUV market with a compact model.

The compact Evoque comes with a fairly expensive price tag, between 66 million won ($58,000) and 90 million won, yet it sells more than 100 units on average every month. The compact SUV is especially popular among consumers living in the posh Gangnam District. It is even dubbed the “Gangnam joobu (housewife) SUV.”

The new Evoque is the first upgraded version in four years, but it is considered by experts as a new category among SUV vehicles, with a frame that has been lowered and a sloping roofline that gives the car a more dynamic appearance.

Manufacturers who produced traditional off-road SUVs are joining the downsizing trend. Jeep, which started off building military vehicles for the U.S. Army, introduced a compact SUV Renegade last month for the first time in its 74-year history.

With the release of this compact SUV, the company has been able to complete its lineup that includes the large-size Grand Cherokee, mid-size Cherokee, small-size Compass and the compact Renegade.

Pablo Rosso, Fiat-Chrysler Korea CEO, said the Renegade isn’t a vehicle that only has the appearance of a SUV, but it is a true SUV that inherited the tradition of Jeep to be driven off road.

Another major change in the SUV market is adding the DNA of other types of vehicles as a feature. Despite some complaints from diehard SUV fans that such changes are making the identity of SUVs ambiguous, sales are rising.

Kia introduced the cross-over utility vehicle (CUV) Soul in 2008. The CUV combined the strong points of a sedan, a wagon and a hatchback. Soul is considered a vehicle between a sedan and SUV. Last month, it ranked No.1 in the U.S. CUV market in sales.

According to U.S. automobile industry research company Ward’s, CUVs will account for one-third of new vehicle sales in the United States in 2018.

Volvo last month unveiled its CUV V60 Cross Country. The CUV design is based on the automaker’s sports sedan S60. The CUV has raised the ground clearance while lowering the vehicle’s height. The purpose was to provide a better driving view while improving the vehicle’s balance.

Sport activity coupe (SAC) vehicles are also contributing to the diversification of SUVs. These are cars that have combined the wide space of an SUV and the driving performances of a coupe. The difference between an SAC and SUV is that an SAC’s frame curves starting from the B-pillar, which is the center of the vehicle.

SUV manufacturers are also diversifying the powertrain on the vehicles. In the past, people immediately associated SUVs with diesel engines. Today, the vehicle comes in the form of a hybrid engine vehicle as well as an electric vehicle.

Japanese Toyota premium brand Lexus introduced its compact SUV NX300h a year ago. It installed Toyota’s strength and was the first attempt in this respected category.

The leading Korean automaker Hyundai Motor Group has taken a step further as they have worked on developing a hydrogen-fueled SUV. The result came up in 2013 when they introduced the world’s first fuel-cell electric vehicle, the SUV Tucson, in 2013. Currently, its affiliate Kia Motors is working on developing a hybrid-exclusive compact CUV that it plans to introduce next year. It is smaller than its small-size Sportage SUV.

Meanwhile, the competition on high-end SUVs is also getting intense.

Despite strong criticism from fans, Porsche released its SUV Cayenne in 2002. Currently, the SUV accounts for more than half of the automakers’ revenue in the Korean market. It is called the “Gangnam Santa Fe (Hyundai Motor SUV).”

Today, one out of three mini cars sold in Korea is a Countryman. When it first appeared, it did not get good reviews, as people felt it didn’t look much like a true Mini because of its bulked-up size. But it is now considered a main contributor that has helped the Mini brand appeal to Korean consumers.

“As the culture that emphasizes practicality and leisure, the popularity of SUVs will likely continue,” KAMA Chairman Kim Yong-geun said. “Korean automotive brands that have mostly focused on sedans should try to diversify their lineup in hopes of meeting the growing demand for SUVs.”