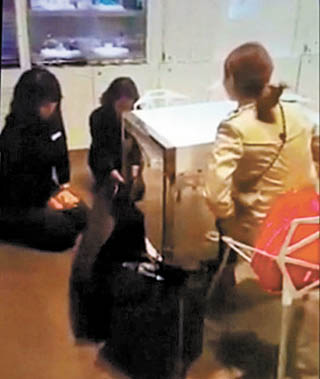 Any employee in the service industry - including salespeople at department stores, flight attendants and even telemarketers - will now be medically covered for depression resulting from a physical or verbal attack by a customer, the Ministry of Employment and Labor announced on Monday.

The government’s move to recognize the psychological damage is a huge shift in position, as it previously only provided coverage for those diagnosed with post-traumatic stress disorder after an actual physical assault.

The Ministry of Employment and Labor will cover depression and adjustment disorders under work hazard insurance.

If an employee is working multiple jobs and is assaulted at one of them, their insurance benefits will now be calculated according to their average monthly pay. In the past, benefits were only given according to the paycheck received at the job where the accident occurred.

The outraged customer had reportedly been lambasting the employees for over an hour about repairs on two pieces of jewelry purchased seven years ago, according to the police.

On Oct. 10, a middle-aged woman and her son visited the Swarovski store and asked for free maintenance on a 230,000 won ($200) necklace and a 295,000 won bracelet, but were told by the employees that she would have to pay for 80 percent of the repairs because she lacked documentation for the pieces. The customer reportedly yelled at the employees for 15 minutes and left.

On Oct. 13, the daughter of the customer called the headquarters of Swarovski Korea, and after much complaining was able to get the free maintenance that her mother wanted. Not satisfied, she visited the store at 3 p.m. on Oct. 16, where she accused the employees of insulting her mother by not giving her the free maintenance that she was able to get from headquarters.

The video was filmed by another customer passing by and uploaded on the same day.

The department store immediately released a statement insisting that the employees knelt on their own accord hoping to end the confrontation quickly. The employees took a week-long break the following day.

The incident was not isolated.

In December 2014, a video of a parking attendant kneeling in front of a woman in her 50s and her daughter at Hyundai Department Store in Bucheon, Gyeonggi, went viral. The woman claimed to be a “VVIP” and felt as though she had been disrespected by the employee.

In January, a female customer at a department store in Daejeon shouted, threw a cloth on the floor and even slapped the face of a male employee after she was denied a refund.