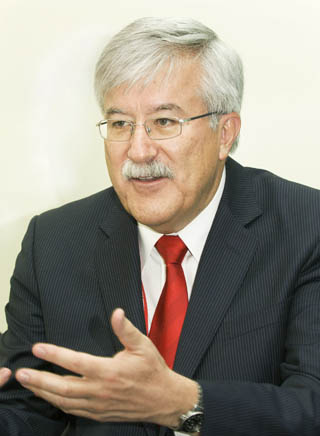 Oscar de Buen Richkarday, president of the World Road Association, speaks during an interview with the Korea JoongAng Daily

As technology continues to grow and expand, the world’s road and transit systems are due to see a tremendous shift, according to Mexican civil engineer Oscar de Buen Richkarday.

The president of the World Road Association (Piarc), de Buen Richkarday visited Seoul ahead of the organization’s 25th World Road Congress, which runs until Friday.

This year’s event hosts representatives from 100 countries and will discuss the latest in road development and mobility.

The Korea JoongAng Daily recently sat down with the president to hear more about the congress as well as how Korea was selected as its host city.

Q. This year’s theme is: “Roads and Mobility - Creating New Value From Transport.” What is the relevance behind this theme?

A. What the association normally does is to ask organizing countries to suggest a series of topics or themes that may be interesting or relevant for the local road community. So Korea’s organizing committee proposed a number of possible topics. The one that we selected is “Creating New Value from Transport.” Transport [has been influenced] by a series of new technology that has made it possible to do things that were previously not possible.

So the decision is intended to encourage people to think about new things and how we can undertake new services.

Can you explain how Korea became a host city this year?

We have very well-established procedures in selecting a host city. Countries and cities interested in organizing the World Road Congress may have to submit a bid several years in advance. Then [the World Road Association] reviews the bids and makes sure they comply with the terms of reference. We also look at whether they have the venues and facilities needed to hold such a large congress. To select the site, we put it to vote. The one that receive the largest vote will be selected. Seoul was chosen five years ago when there were two other bids from two European countries. And Seoul had a comfortable win.

How would you define this year’s focus at the World Road Congress?

There are a few pressing issues surrounding the area. One is clearly road safety. Road safety is generally an area of concern for all road-related bodies. We need to respond to the call of the United Nations to ensure that less road fatalities occur. Another important topic deals with climate change. We explore the ramifications of climate change on road transportation and road networks. We need to be prepared to sustain the strains that are expected to occur in the wake of climate change. Equally important is how to apply and get the most out of new technologies and development in the field of technological innovation. There is a lot of new knowledge and technology out there that need to be identified and analyzed to provide better service in the transportation sector.

What are the major challenges for countries in managing roads?