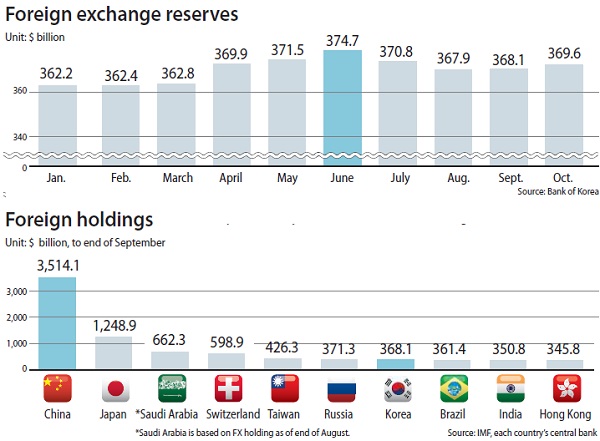 According to the Bank of Korea on Wednesday, Korea’s reserve pool in October added nearly $1.5 billion from the previous month, totaling $369.6 billion. The reserves reached an all-time high of over $374 billion in June thanks to the current-account surplus, which has continued to increase for a record-breaking 44 months.

But reserves went on to shrink in July and August, largely because of the appreciation of the dollar against the won.

The situation turned around in September when offshore securities profits increased.

“Foreign asset management profits increased [in October], and thanks to gains in our securities interest profits, deposits also expanded,” a BOK official said.

Last month, the central bank’s securities holdings, which account for 90.5 percent of the nation’s reserves, added $260 million from the previous month to $334.6 billion.

However, October’s deposit, which makes up the second-largest portion of the reserves at 6.9 percent, saw a sharper growth, gaining $1.26 billion from September to total $25.3 billion.

Korea ranked seventh in the world based on its reserves of $368.1 billion as of the end of September. China kept its No. 1 spot with $3.51 trillion.