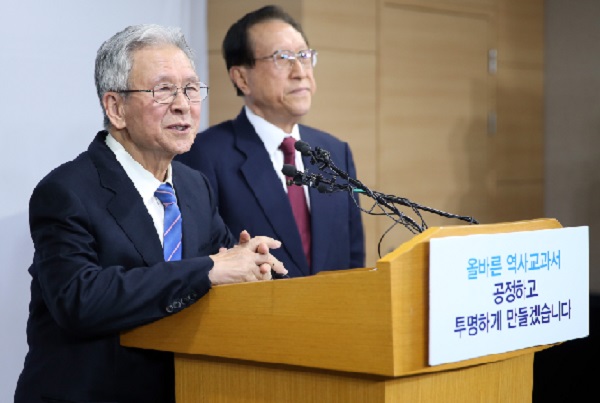 The government on Wednesday named two veteran historians who will participate in the highly contentious state-penned history textbooks.

The institute, an organization under the Ministry of Education, is in charge of developing the new textbooks for middle and high schools. The books will be introduced into classrooms starting in March 2017.

Kim Jung-bae, head of the institute, made the announcement at a news conference. Shin attended the session, which took place at the government complex in downtown Seoul, but Choi was a no-show. After some local media reported Tuesday night that Choi had joined the project, the 69-year-old historian didn’t want to address the public, Kim said.

“The current textbooks contain various problems,” Shin said. “I decided to participate because I want the new textbooks to serve as an opportunity for the public to more closely approach our history based on more clear and accurate facts.”

Choi studied at Seoul National University and Harvard University and returned to his alma mater in 1981 to teach history until 2012. A former head of the Korean Ancient Historical Society, Choi participated in writing history textbooks for high school students for 23 years from 1998 to 2011.

Shin is a former member of the institute. He worked as history professor at Ewha Womans University from 1981 to 2003 and previously headed the Korean Association for Ancient Studies.

The selection of main authors for the Goryeo, Joseon, modern and contemporary history sections was nearly finalized, but no announcement was made on Wednesday.

“We will invite scholars with the highest achievements in their fields as main authors,” Kim said. “They will be historians like Shin, who has great accomplishments in research and writing.”

According to the institute, it plans to recruit a total of 36 authors, including the main authors. Applications will be received by the institute until Monday. If necessary, the institute will also invite scholars to join the project.

“We want to release the names at the earliest possible date,” said Jin Jae-gwan, a senior official of the institute. “But if authors say it will disturb their work, then we may not release their names until the final texts are made. We will make that judgement by consulting the authors.”

According to the institute, it will develop two history books for middle school students and accompanying teachers’ guides. A history textbook for high school students will also be developed. The authors will have until next November to create the books.

The drafts will undergo internal review by the institute for one month. Outside experts will be asked to review the materials. The Northeast Asian History Foundation and the Independence Hall of Korea as well as the National Institute of the Korean Language will participate in the reviews.

The Ministry of Education is currently developing publication guidelines that will specify the standards and principles for the new textbooks. They will be announced at the end of this month.

The new textbooks will also feature more materials on prehistoric times and ancient history, while reducing the sections on modern and contemporary history.

The modern and contemporary history section extends from the late Joseon period. The history of Korea’s industrialization and democracy movement were expected to be the most contentious subjects, as liberals worry that the new textbooks will glorify Korea’s dictatorships and the role of its conglomerates.

According to the Education Ministry, the modern and contemporary history section will be reduced to half or less of the current amounts, while prehistoric and ancient history will be doubled. The attempt to devote more pages to prehistoric and ancient history is to prevent attempts by other countries to distort the history of Northeast Asia, Hwang Woo-yea, deputy prime minister and education minister, said on Tuesday.

As the Park administration took steps to restore state control of history education, the head of the main opposition party issued a statement on Wednesday vowing to stop the change.

Moon said the party will form an alliance with other political parties, scholars and civic groups to protest the change. He said the NPAD will file a constitutional petition to challenge state control over history textbooks, citing a legal precedent from 1992.

The presidential office said on Wednesday that it will focus on other pressing issues, including the severe drought and economic recovery, rather than spending its energy on the textbook controversy.

“Now is the time to put together the wisdom and power of the people to create proper textbooks,” Jeong Yeon-guk, spokesman for President Park, said. “It is our position that now is also time to create measures to overcome the drought, improve people’s livelihoods and ratify the Korea-China free trade agreement.”