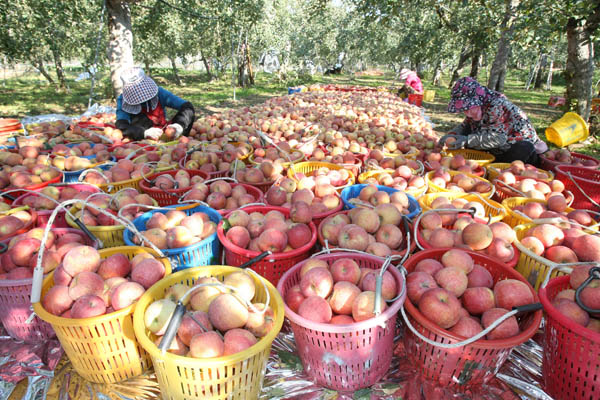 Despite the severe drought that hit the country this year, fruit farmers have seen a bumper crop. The drought was relatively less serious in Korea’s fruit-farming regions and, instead, afforded just enough sunshine for produce to ripen.

However, an abundant harvest doesn’t always equate to abundant profits for farmers. In this case, the lack of rain brought down prices as well.

The orchard trees in a persimmon-farming town in Cheongdo County, North Gyeongsang, had a few persimmons left on their branches on Tuesday. The harvest season is typically over around this time of the year.

“Some of the farmers have given up on picking them since the price dropped,” said Ahn Seung-yeong, 66, the head of the village. 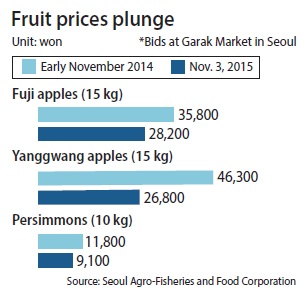 Lee Jun-su, a 45-year-old farmer, added: “I don’t think I could profit after paying all my personnel expenses for the harvest.”

According to the Cheongdo County local government, persimmon farming towns there saw a 20 to 30 percent rise in the persimmon harvest than in an average year, thanks in large part to the optimal weather conditions needed for the fruit to grow.

Because the county remained unaffected by the summer typhoons, the fruit crop sustained little to no damage, while the lack of rain meant there was more sunlight.

“We hardly saw any damage from disease or insects because of the drought,” Lee said. “The drought actually brought a bumper crop.”

Cheongsong County, North Gyeongsang, saw 549.8 millimeters of rainfall, only 65 percent compared to last year. It is also in a similar situation: Apple farmers in the county yielded 110 billion won ($97.1 million) worth of apples last year, and the county government is expecting about a 10 to 20 percent increase in this year’s crop.

Fruit prices are dropping as a result. In an auction at Garak-dong Agricultural and Marine Product Market in southeastern Seoul, a 15 kilogram (33 pound) box of Yanggwang apples, a Japanese brand, was traded for 26,800 won, nearly half the price a year ago at 46,300 won.

The price of Fuji apples, meanwhile, dropped by 21 percent and the price of persimmons fell by 24 percent.

“Fruit prices have plunged. Large shopping malls have reduced their fruit purchases with more consumers buying foreign fruits like kiwis and cherries, and the bumper crop of apples this year is causing the price to drop further,” said Kim Jeong-hun, an official from the Cheongsong County government in charge of apple farming. “The apple harvest season isn’t over yet, so I’m worried apple prices could decrease further.”

The governments of fruit-farming cities are also carrying out campaigns to spur fruit consumption. The Cheongdo County government is holding persimmon tasting events at Seoul Square, Myeongdong and several other cities.

Rice farming is facing similar fate. Statistics Korea estimates that the rice crop this year will reach 4.258 million tons, about 200,000 tons more than in an average year.

“The drought was not very severe in the southwestern region, the breadbasket of the country,” said Park Hong-jae, an official from the Rural Development Administration. “Irrigation has been well-equipped and the drought meant increased sunshine and increased the crop.”

On Tuesday, farmers from more than 10 cities and counties in the southwestern region protested in front of their respective local government buildings.

“The government should raise rice prices by purchasing more rice reserves and shipping more rice to North Korea,” said Kim Jeong-ryong, the secretary general of the North Jeolla chapter of the Coalition of Farmers’ Associations.