The tricky business of music charts

The tricky business of music charts 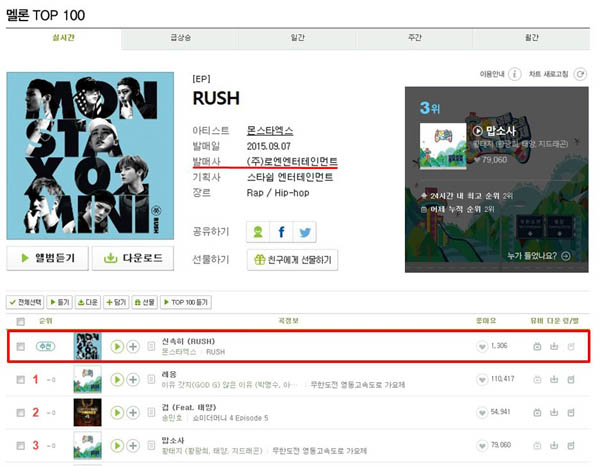 A screen capture from online music portal Melon shows its top 100 music chart, which is updated in real time. In September, the chart ranked “Rush” by K-pop group Monsta X as a recommended song - even ranked higher than the No. 1 song. The group’s mini-album was released by Loen Entertainment, which owns Melon. Many online music portals, which are owned by music distribution companies, tend to promote their affiliated artists on real-time music charts, a practice criticized as unfair. [JOONGANG ILBO]

She can search for her favorite artists and make her own playlists, but she usually checks the top 100 list, a real-time online music chart, whenever she turns on her smartphone.

“I usually listen to the top 100 almost all the time because I can keep up with the most streamed songs on a real-time basis,” Ahn said.

In the era of digital music, top 100 charts, which are available on any online music portal, influence the majority of music listeners.

Since the market is heavily focused on real-time online music charts, music portal operators take advantage by placing so-called recommended songs on the top of the charts to expose subscribers to selected tunes 24 hours a day.

This recommended song practice has been described as an axis of evil by industry insiders because the music portals, which are all affiliated with music distribution companies, use the charts as platforms to advertise their own products.

So whether Melon subscribers want to or not, they are bound to hear the selected tracks from Loen when streaming Melon’s top 100 chart.

Real-time online music charts are often used to measure a song or artist’s popularity. Because of this, the more a song is played, the more the artist or group will get the chance to appear on TV music shows and other promotional opportunities.

These online music charts reportedly cause other problems, too.

Small entertainment agencies often manipulate real-time online music charts by enlisting the services of brokers operating in China. The brokers have up to hundreds and thousands of accounts with major online music portals, largely thanks to the rock-bottom streaming fees, and they use the accounts to repeatedly play certain songs, thus giving them a higher rank.

People working inside the music industry have been speaking out about the issues surrounding recommended tracks, but it has largely had no effect.

Recently, however, Korean music portals have been announcing they will scrap the controversial system.

Mnet, the third-largest online music portal, was the quickest to act on the issue.

CJ E&M, which owns Mnet, said on Oct. 21 that it would no longer promote certain songs through its real-time online music charts. The announcement came days after a seminar hosted by the Record Label Industry Association of Korea in Seoul on Oct. 13.

Ahn Suk-joon, the head of CJ E&M, recently told Korea JoongAng Daily affiliate Ilgan Sports, “Real-time online music charts and recommended songs are not helpful for the industry at all. They are just venom. They empower some people. And some others who don’t have power must resort to those who have authority.”

Genie, the No. 2 online music portal which is affiliated with KT Music, said on Tuesday that it would not recommend songs anymore.

“If the entire market works together to restore the distorted music market, mainly driven by the real-time online music charts, the ecosystem will be improved both for content creators and service providers,” said Hong Sang-wuk, director of the content business team at KT Music, in a press release.

Other smaller services such as Bugs and Soribada are also on board.

“The best way to bring order to the market is scrapping the system,” said Kim Min-yong, a professor of management at Kyung Hee University who also attended the seminar. “If it’s impossible, they should share all the procedures for selecting recommended songs.”

According to Kim, of all the recommended songs on Melon as of August, 57 percent of them were songs distributed by Loen.

As for Genie, 42 percent of the recommended songs were released and distributed by KT Music.

Instead of ending the practice, Melon said it will improve it by customizing recommended songs for each individual subscriber.

In response to the coming changes, Lee Youn-hyuk, secretary general of the Record Label Industry Association of Korea, said, “I highly appreciate those who made such a drastic decision because it is not easy to give up on vested rights. In addition, it made me think the country’s music scene is still capable of purifying itself.”

However, unless Melon decides to get on board with ending the practice, “it is only 50 percent of change,” Lee added.