Old rivals fight for spot on the nat’l judo squad

Old rivals fight for spot on the nat’l judo squad 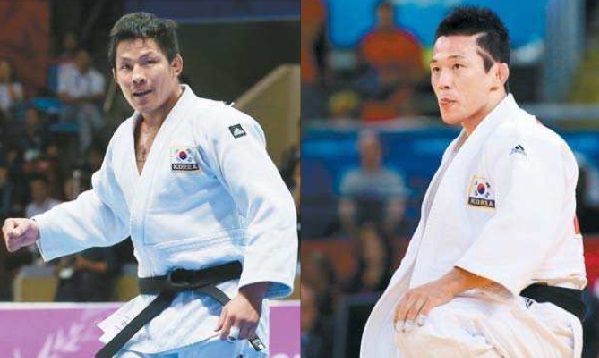 
The 2016 Summer Games in Rio de Janeiro are just nine months away, and the lineup for Korea’s national judo team is taking shape. But one weight category is still hotly contested: the men’s 81 kilogram.

The competition is expected to come down to two former world champion judokas, Kim Jae-bum and Wang Ki-chun, who entered the first round of the national team selection trial at Jinnam Arena in Yeosu, Seouth Jeolla, on Monday. If both don’t get knocked out in the early rounds, they are scheduled to meet in the semi-finals on Wednesday.

That seems likely, as other top judokas like An Ba-ul, Kwak Dong-han, Kim Won-jin and An Chang-rim, whom all won medals at the World Judo Championships in Astana, Kazakhstan in August, are not competing in this trial because they’ve already earned enough ranking points through international tournaments to stay with the national team.

The members of Korea’s top judo squad are determined by points accrued from three selection trials and international tournaments.

But the local judo community sees this first event as decisive, because only the winner will be allowed to compete in the international tournaments lined up before the second trial in March.

The histories of Kim and Wang are intertwined.

Wang, 27, made a memorable debut in the local judo scene in 2007, edging Kim and the 2004 Athens Olympic champion Lee Won-hee to top the national team selection trials in the 73-kilogram category.

Wang later went on to win silver at the 2008 Beijing Olympic.

After being stunned by Wang, Kim decided to play in the 81-kilogram category in November 2007. He eventually made it onto the national team in the higher weight class, and also took silver in Beijing.

But four years later, the fate of the two judokas split. While Kim managed to win gold in London in the 81-kilogram category, Wang returned to home without a medal in the 73-kilogram category.

Kim went on to achieve a grand slam in his weight class, winning the top prize at the Olympics, World Championships, Asian Game, Asian Championship.

Wang, on the other hand, fell into a slump, and was even charged with assault in 2009.

He returned to the mat in 2013, this time climbing up to the 81-kilogram weight class. In the Gwangju Summer Universiade in July, Wang won silver.

And just like seven years ago, Wang is now challenging Kim, while both have their eyes set on the Summer Games in Rio de Janeiro next year.

But now, experts are saying Kim’s game plan has changed because his stamina isn’t as it once was. Though he may have to give up his nickname “Mr. Five Minute” - referring to his tendency to use all five minutes of a bout - Kim now goes for the big finishing moves like the seoi nage (shoulder throw) or uchi-mata (inner-thigh throw).

“These days, I tell Kim to finish the game early by using big techniques because that helps him to manage his stamina,” said national team assistant coach Choi Min-ho, who is also a gold medalist in 2008 Summer Games.

Wang’s main weapon has been the seoi nage or tai-otoshi (body drop). He has been using the techniques instantly to nab the victory, and if those techniques don’t work, Wang used variations of seoi-nage or ground-floor techniques.

However, Wang has also changed his style. As he’s facing bigger opponents, Wang now goes to collect points instead of attempting to end the match with ippon (one full point). He now uses foot techniques frequently to get waza-ari (a half point).

In the men’s 81-kilogram, Lee Seung-su, who won the gold medal in the Military World Games last month in Mungyeong, North Gyeongsang, is considered as the event’s dark horse.

But judo fans are already have their hearts set on a match between of Kim and Wang.