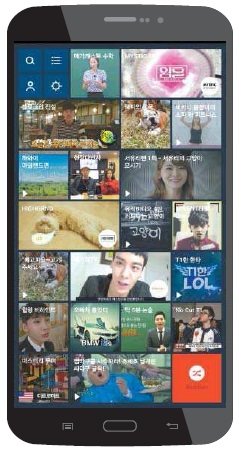 SK Telecom is taking steps to tap into the growing popularity of mobile video content fueled by self-styled online personalities.

The telecom operator launched mobile video platform Hotzil on Monday, part of its move to expand its business portfolio beyond network services.

Rather than being just a host for popular online shows, Hotzil operates as a multichannel network that produces, promotes and manages the creation of content in exchange for a percentage of advertising revenue.

The app is available across all carriers and has a total of 23 channels led by popular online celebrities on themes ranging from music, entertainment and gaming to beauty and education.

The entry into the video entertainment service is the latest in a series of telecom companies’ efforts to diversify their revenue stream amid sluggish sales growth in their core wireless network services.

SK Telecom is the first mobile carrier to offer a multichannel network, though other competing carriers provide video streaming services for its subscribers.

The move also coincides with the rising presence of so-called YouTube personalities, who become famous by self-producing content ranging from makeup tutorials to video-game narration. Backed by strong network connections that allow for video streaming on virtually every street corner, Korea has seen a particularly steep rise in these sorts of stars.

SK Telecom will provide a studio for the content creators, where they can film and edit their shows. Professional staff will also be on hand to help with the filming process.

The user interface is designed in a way that facilitates customized content consumption.

The entry into the emerging segment will put the top mobile carrier in direct competition with CJ E&M, a leading player that was the first to spot the potential of the sector.

CJ E&M is among the world’s top 50 multichannel networks in terms of the number of subscribers.

LG U+ has also made efforts to strengthen its video services for subscribers, launching the mobile LTE Video Portal in July. The company has said that customized content services - not faster Internet speeds - will define the fate of telecom companies in the future.

The mobile platform offers a broad range of video content, from movies, television shows and sports broadcasts to YouTube videos and e-learning materials.