U.S. Takata air bag recall may expand to other carmakers

U.S. Takata air bag recall may expand to other carmakers 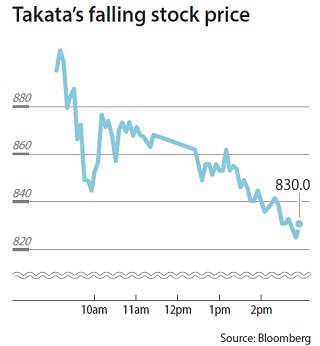 The Takata Corp. air-bag recall already affecting a dozen automakers in the U.S. may widen as the nation’s regulator heightens its scrutiny of the devices.

“Everyone’s got to be vigilant,” Foxx said in an interview Monday at a U.S.-Japan Council conference in Tokyo. “Even though our focus has been on the 12 manufacturers that we know pose a risk to safety of our consumers, it doesn’t preclude companies from doing their own testing. Our investigation remains open, so I wouldn’t preclude the possibility that other OEMs would be affected.”

The U.S. has taken unprecedented steps overseeing recalls of Takata air bag inflators, which deploy too forcefully and have injured scores of motorists and killed eight people. The U.S. National Highway Traffic Safety Administration last week fined Takata as much as a record $200 million and ordered the company to phase out its use of inflators that use ammonium nitrate propellant.

Following the regulator’s order, Honda Motor, Toyota Motor and Nissan Motor were among automakers who said they would no longer use the Takata inflators in models under development. Honda said it’s aware of evidence suggesting the supplier manipulated air bag inflator test data.

“It’s always troubling when you have a manufacturer who you rely upon to provide truthful information and that information is not provided,” said Foxx, 44, who didn’t meet with Tokyo- based Takata during his visit to Japan. “In many cases, what we found were omissions that were unnecessary and harmed our ability to ensure the safety of consumers, and in some cases, even errors of commission.”

Volkswagen last month said it was collecting Takata air bags from its vehicles for testing and told NHTSA that getting replacement parts would take more than a year if recalls are expanded. There are no indications of a defect in its vehicles, and Volkswagen said it isn’t planning a recall, the German carmaker wrote to NHTSA in a letter dated Oct. 15.

In separate letters, Daimler’s Mercedes-Benz unit and Jaguar Land Rover told NHTSA that they’re not testing air bags in their vehicles or planning recalls. Tesla’s letter was made public but redacted and cited confidential business information.

Spartan Motors Inc., a maker of fire trucks, said in its letter the company hadn’t been made aware that it should be included in the recalls. NHTSA had sent letters to the companies in September inquiring about their use of Takata air bags with ammonium nitrate propellant.

The “coordinated remedy order” released by NHTSA last week divides the vehicles already involved in Takata’s recalls into priority groups, with the deadline for the first set of vehicles to be repaired by March 2016. Others begin in 2017 and run through 2019.

Takata President Shigehisa Takada last week told reporters the company was considering survival plans, which weren’t at the stage he could discuss. The supplier has hired SMBC Nikko Securities Inc. to draw up a fundraising plan for the air-bag supplier, with the financial adviser proposing an additional share sale as one of the potential options, according to people familiar with the matter.

“There have been some commitments made by Takata to clean this situation up,” Foxx said, when asked whether he had concerns about the company’s viability. “We’re expecting them to carry through on those commitments.” Bloomberg