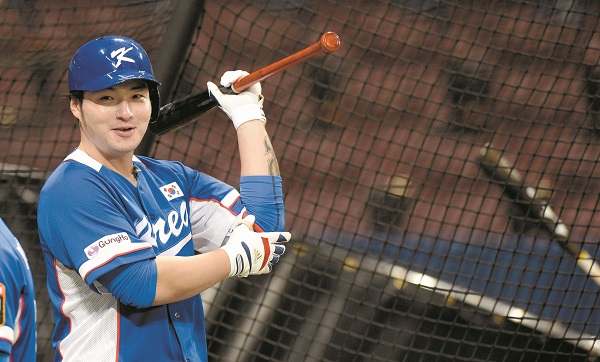 The Major League Baseball (MLB) announced on Tuesday (Korean time) that the Minnesota Twins won the negotiating rights to Park after they submitted the highest bid among big league clubs. The Twins, which finished second place in the Central Division of the American League this season, later confirmed via their Twitter account that they won the bid.

The Heroes on Saturday announced that they accepted a bidding price of $12.85 million for Park and officially allowed their first baseman to pursue a big league career. However, the Seoul-based club wasn’t told which U.S. club was the top bidder.

The Twins will now have exclusive rights to negotiate with Park for 30 days. The Heroes receive the posting fee of $12.85 million only if two sides sign a contract.

Park is currently in Taiwan for the Korean national team’s Premier 12 games. He went 2-for-4 in Korea’s 5-0 loss against Japan on Sunday for the tournament opener and will feature against the Dominican Republic tonight.

Park already signed with the U.S.-based agency Octagon to represent him in the negotiation. Alan Nero, the managing director of Octagon’s baseball division, will likely negotiate with the Twins on the behalf of the 29-year-old Korean.

This is the second time the Twins have won a bid for an Asian player, though their first recruitment through the posting system disappointed.

The three-time World Series champions previously won the bidding for Tsuyoshi Nishioka for $5.32 million in 2010, and eventually signed him to a three-year deal worth $9.25 million. However, the 31-year-old Japanese infielder struggled in the MLB and walked away from the last year of his contract to return to Nippon Professional Baseball.

Now that the team is revealed, the question goes to what contract terms and conditions Park will be offered.

Local analysts are predicting that Park will get a four or five year deal worth between $20 million and $25 million. Park’s posting fee is more than double that of Kang Jung-ho, who signed a four year deal worth $11 million with the Pittsburgh Pirates last year after receiving a posting fee of $5 million. Kang, who also moved from the Heroes, was represented by Octagon, the same agency that Park has now hired.

“In the negotiation, it’d be standard to ask that Park receive a salary twice as large as Kang’s,” Daniel Kim, a baseball analyst, told Ilgan Sports. .

If Park signs with the Twins, it will also be interesting to see which role and position the two-time MVP in KBO will be given.

Park is a proven power hitter, becoming the first player in KBO history to lead in home runs and RBIs for four consecutive seasons. He recorded a .343 batting average, 53 home runs and 146 RBIs over 140 games this season.

“When you sign with a big league club, what’s important is how many games he can play,” said “The reason why the Twins spent so much money is that they see Park as an instant booster for the team.”

The Twins already have franchise star and Minnesota-native Joe Mauer at first base, while young Dominican slugger Miguel Sano is projected to move to third base or to the outfield. But Song said that Park and Mauer may switch positions during the season depending on the situation.

Mauer, who switched from catcher to first baseman two years ago, is a three-time batting champion in the AL, but has been struggling recently. The 2009 AL MVP had only .266 batting average with 10 home runs this season.