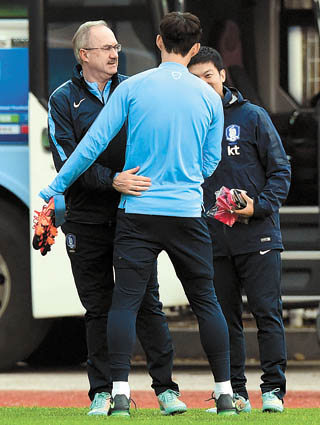 Uli Stielike is worried about the national team’s World Cup qualifiers match against Myanmar on Thursday, but not because of their opponent’s skills.

Instead, he’s losing sleep over the condition of the pitch.

On Monday, the national squad gathered at Suwon World Cup Stadium in Suwon, Gyeonggi, where they were to practice on an auxiliary field.

But the coach quickly lamented the condition of the field, pointing out its myriad bumps and ragged grass.

“Our team should be the priority, but it’s sad that the condition of the pitch is not helping us,” Stielike said on Monday. “Myanmar will focus on defense and use long passes, while we need to counter them with short and quick passes. But this kind of pitch condition will help our opponent instead.”

It wasn’t just the auxiliary pitch that disappointed Stielike; the German also said the conditions at the main field in the stadium are inadequate. He added that those who manage stadiums should be more careful about maintaining good condition so that not only the national team, but also K-League teams can do better on the field.

“In a friendly match against New Zealand in March, the pitch condition of Seoul World Cup Stadium also wasn’t good,” Stielike said. “This kind of incident is happening repeatedly.”

The Korea Football Association (KFA) said that there was no alternative because the National Football Center (NFC) in Paju, Gyeonggi is already occupied, and it’d be too far to train in Hwaseong, Gyeonggi.

The KFA said that it will work with Suwon World Cup Stadium Foundation to improve pitch conditions through the match day. After playing against Myanmar, the KFA said the national team will train at the NFC until Sunday before flying to Laos for their World Cup regional qualifying match held on Nov. 17.

“This is final international match of the year,” Stielike said. “We hope to extend good atmosphere and have a good wrap up of the upcoming two matches.”