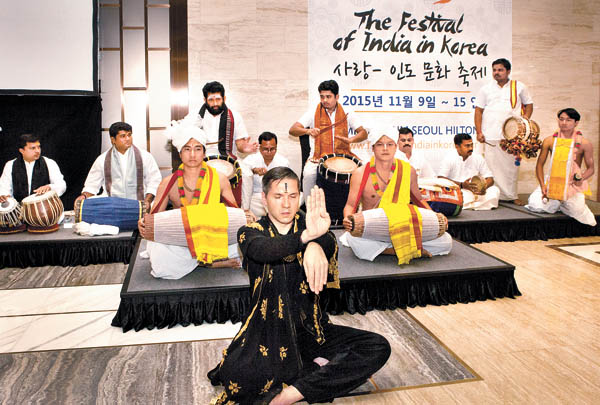 Musicians play percussion instruments on Monday at the Millennium Seoul Hilton as part of the “Drums of India” program in the first Festival of India in Korea. [PARK SANG-MOON]

The Indian Embassy kicked off its first cultural festival Monday evening at the Millennium Seoul Hilton in Jung District, inviting the public to a week-long series of music, dance, yoga, film and modern Indian cuisine.

The 1st Festival of India in Korea, themed “Sarang,” will run through Sunday in Seoul, Busan and Chuncheon in Gangwon, with each city featuring different programs.

That reglationship goes back to A.D. 48, when Korea’s King Suro of Geumgwan Gaya married Princess Suri Ranta from the Indian kingdom of Ayodhya.

The theme “also depicts the magical colors that are India,” the ambassador continued, “and that is Indian culture.”

“Our hope is that, with this first experimental cultural festival, we in the future will have a space and foothold in the vibrant cultural market in Korea.”

Doraiswami said he hopes the event “energizes the two-way flow of ideas, commerce and people” between the Asian countries.

“Drums of India,” an ensemble of percussion instruments, will hold live performances at the Busan Cinema Center on Wednesday at 7 p.m.; at the Lotte Department Store in Bucheon, Gyeonggi, on Friday at 2 p.m.; and on Nami Island in Chuncheon on Saturday and Sunday at 11:30 a.m. and 2:30 p.m.

The “Bollywood Dance Workshop” will teach visitors about the choreography so vital to Indian cinema at the Busan Cinema Center on Wednesday at 5 p.m.; at the Millennium Seoul Hilton at 7 p.m. on Friday; and on Nami Island on Saturday and Sunday at 11 a.m. and 1:30 p.m.

In “Odissi Dance,” an Indian dancer will show how to perform one of the oldest dance traditions in the world at the Busan Cinema Center on Wednesday at 7 p.m. and at the Lotte Department Store in Bucheon on Friday at 2 p.m.

Doraiswami will give a lecture entitled “India for a Billion Reasons” at Hankuk University of Foreign Studies in Seoul on Friday at 3:30 p.m.

“Rajasthan Josh” will demonstrate the folk music traditions of northwestern India at the Millennium Seoul Hilton on Friday at 6 p.m. and on Nami Island on Saturday and Sunday at 1 p.m. and 3 p.m.

Yoga classes will be offered at the Millennium Seoul Hilton on Saturday from 10 a.m. to noon and on Nami Island on Saturday and Sunday at 11:30 a.m. and 2:30 p.m. Entry for Nami Island’s program will be charged.

Six Indian films will be screened at the Lotte Department Store in Yeongdeungpo District, western Seoul, from Wednesday through Friday at 11 a.m., 2 p.m. and 6 p.m.

For more information about the festival, visit the Indian Cultural Center at http://indoculture.org/index_eng.php.