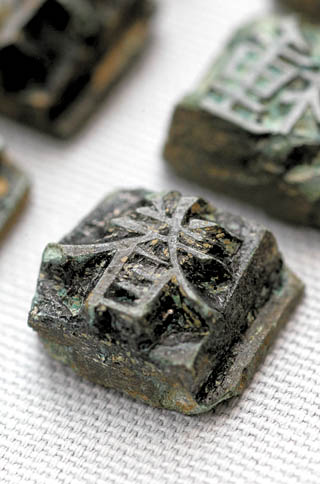 Some claim to have found movable type used in Korea in the early 1200s, nearly 300 years before the Gutenberg Bible. [JOONGANG ILBO]

For years, historians have believed that the first known use of movable metal type was the “Jikji Simche Yojeol,” a book containing the essentials of Zen Buddhism printed in 1377 in Korea, long before the Gutenberg Bible was printed in 1455.

In fact, according to historical records, Koreans first began printing books using movable metal type in the early 1200s, but archaeologists have never found this type or the books printed with it. That is, until 2010, when a Korean antique dealer claimed to have discovered just that.

Since then, controversy over the authenticity of the claim has been ongoing in the historical community, with some calling the whole thing a sham.

In the latest revelation, the National Forensic Service recently made the bombshell allegation that some of the movable metal type supposedly from the 13th century show clear signs of fabrication.

And the mystery continues to develop as the government is set to announce its final verdict on the authenticity of the controversial type, which is called Jeungdogaja, late this year or early next year.

Jeungdogaja is movable metal type that was used to print a book of Buddhist sermons titled “Nammyeong Cheon Hwasangsong Jeungdoga (Song of Enlightenment with Commentaries by Buddhist Monk Nammyeong)” during the Goryeo Dynasty (918-1392). 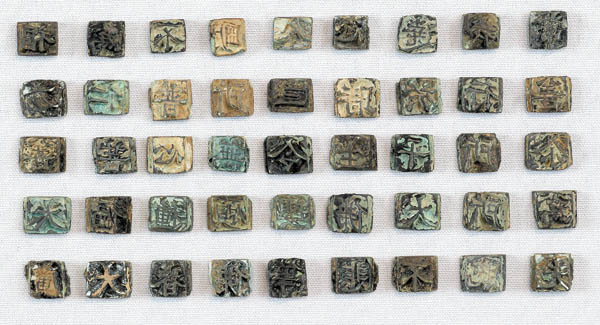 A set of movable metal type called Jeungdogaja supposedly from the early 13th century is again making headlines, as the National Forensic Service released a report claiming that some of the pieces may be fabricated. [JOONGANG ILBO]

A version of the book printed with woodblocks was made in 1239 and is National Treasure No. 1132, but according to historical records, the book was first printed using movable metal type. The book and the type have never been found.

So if the recently discovered Jeungdogaja is genuine, it would rewrite the history of printing technology. As the mystery continues to unfold, the Korea JoongAng Daily investigated this highly complex, yet significant issue.

As of now, there are three individuals and institutions that claim to posses pieces of Jeungdogaja.

Kim Jong-chun, chairman of the Korean Antiques Association and director of the Daboseong Ancient Art Museum, says he has 101 pieces; the Cheongju Early Printing Museum in Cheongju, North Chungcheong, believes it has seven; and the National Museum of Korea says it might have one. 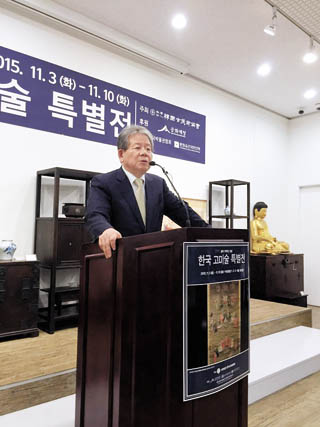 Of these, the National Museum in 2010 and Kim in 2011 asked the government in to designate their artifacts as national treasures, which resulted in the government beginning an investigation of their authenticity.

Between June and November of last year, the National Research Institute of Cultural Heritage (which operates under the state-run Cultural Heritage Administration) commissioned a group of researchers at Kyungpook National University in Daegu to study the authenticity of all the movable metal type claimed to be Jeungdogaja.

Led by Nam Kwon-hee, a professor of library and information science, the team concluded last November that 59 of Kim’s 101 pieces and three of the seven in the Cheongju museum’s collection are indeed from the early 13th century.

The Cultural Heritage Administration announced the team’s findings in February, indicating that some of the artifacts are on the way to becoming state treasures.

“We have decided to begin the process of designating this type as cultural heritage,” an official from the Cultural Heritage Administration said in February.

However, the National Forensic Service has outright refuted the findings, starting a war of words between the two state organizations.

Gang Tae-yi of National Forensic Service wrote in a research paper released Oct. 31 that “a 3-D metal CT scan of the seven movable type pieces owned by the Cheongju Early Printing Museum found traces of fabrication,” adding that based on the findings the institute “concludes that they are not made by Goryeo-era traditional techniques.”

First, researchers found an outer layer on the type, which they believe was added to make it look like it corroded over time.Second, researchers discovered a difference in the density of metal components on the inside and outside of the type. And third, they found that two of the pieces demonstrate signs of having been repaired.

But these revelations have hardly put an end to the years-long mystery about whether the supposed Jeungdogaja is fake. Rather, it has opened Pandora’s box, fuelling further debate on the matter.

Gang said since the National Research Institute of Cultural Heritage team deemed not only the movable metal type owned by the Cheongju Early Printing Museum but also those owned by Kim Jong-chun to be authentic, the latter “also needs to undergo scientific and precise analysis,” raising the possibility that Kim’s collection may also be fake.

But Prof. Nam was quick to respond, saying that the National Forensic Service is mistaken because it just doesn’t know as much about ancient relics as he does.

He said in a Nov. 2 press release that the National Forensic Service’s allegation is “an incorrect interpretation due to lack of knowledge in metal types, their casting technology and bibliography.”

“Corrosion can start from the inside for relics made of bronze,” he explained.

As it stands, it’s the National Forensic Service’s word against the Cultural Heritage Administration’s. “It’s hard to say whose words we believe,” Kim Hong-yeong, a representative of the Cheongju Early Printing Museum, told the Korea JoongAng Daily.

Amid the ongoing controversy, insiders in the Korean antique world are not that surprised.

The main basis for the National Research Institute of Cultural Heritage’s argument last November that the seven pieces of movable type owned by the Cheongju Early Printing Museum and 59 pieces owned by Kim Jong-chun may really be Jeungdogaja is radiocarbon dating of the ink that was found on the pieces. Kim has also repeatedly presented radiocarbon dating as evidence.

A group of researchers at Seoul National University conducted radiocarbon analysis of the ink and found it to be from between 1185 and 1300. And the Korea Institute of Geoscience and Mineral Resources also conducted analysis that supports the claim.

However, it is easy to obtain ink that is hundreds of years old.

Another point of contention is the relationship between Professor Nam, the Cheongju Early Printing Museum and Kim.

The Cheongju city government and Cheongju Early Printing Museum, which the city government operates, led a project from 2007 to 2010 to restore movable metal type from the royal court of the Joseon Dynasty (1392-1910). It was during this time that the museum came to possess the supposed Jeungdogaja type.

Cheongju holds an important place in the history of printing in Korea. In 1985, archaeologists unearthed the site of Heungdeok Temple, where “Jikji Simche Yojeol” was printed, in Cheongju. Since then, the city has been using the historical text, which is on Unesco’s Memory of the World Register, to promote itself in Korea and abroad.

One of the institutions that took part in the city’s project back then was Kyungpook National University, with a group of researchers led by Professor Nam. It was also Nam’s team that purchased the seven pieces of type, for about 86.3 million won ($74,600), which was provided by the Cheongju city government.

“We don’t know from whom the researchers at Kyungpook National University bought the type,” an official at the Cheongju Early Printing Museum told the DongA Ilbo. “Also, no one explained to us how the cost was appropriated.”

Professor Nam also has special ties to Kim. Nam and Kim together first announced to the media in 2010 that the pieces of type owned by Kim are indeed Jeungdogaja.

Given this history of collaboration, some argue that the Cultural Heritage Administration’s decision to choose a group of researchers from Kyungpook National University led by Professor Nam to examine the authenticity of the supposedly 13th-century metal type was bound to result in biased findings.

Professor Nam told the JoongAng Ilbo that when the Cultural Heritage Administration asked him to validate the type, he recommended they ask someone else. However, the administration said that only he could study more than 100 pieces of movable type within six months, according to Nam.

The Cultural Heritage Administration admitted that the process had to be finished by year’s end.

In contrast to the certainty of the Cheongju Early Printing Museum and Kim, the National Museum of Korea, which owns one piece of type that may be Jeungdogaja, has taken a cautious stance.

Lee Jeong-geun of the museum’s collection management department told the Korea JoongAng Daily that the museum has never claimed the Goryeo-era type it owns is Jeungdogaja, and is reticent to say so.

“Based on our records, the type in our collection was discovered by the Japanese during the Japanese colonial era [1910-45] in a tomb in Kaesong [the former capital of Goryeo, in what is today North Korea],” he said. “We are asking academia to delve into it.”

Meanwhile, in light of the latest evidence from the National Forensic Service, even the police have begun to investigate how the Cheongju Early Printing Museum came to possess the controversial type.

“Because there have been many suspicions [surrounding Jeungdogaja], we began an internal investigation,” a police source told Yonhap News Agency on Nov. 4. “Based on our questioning of officials of the Cheongju Early Printing Museum on how they came to possess the type, we will further specify our investigation direction.”

The National Forensic Service has said in its report that it believes that the type at the Cheongju museum was fabricated in China. This theory is based on the fact that one of the seven pieces of type bears a Chinese character that was only used in China, not in Korea.

But while some are disputing the authenticity of the type being presented as Jeungdogaja, many scholars still believe movable type was being used in Korea in the early 1200s. The final chapter of “Jikji Simche Yojeol” states that it was printed with movable metal type in 1377 at Heungdeok Temple in Cheongju.

The fact that this technology was being used in Cheongju, so far from the capital of Kaesong, goes to show how prevalent it had become by that point in time, suggesting the technology had been around awhile.

But whether these early examples of movable metal type or the books printed with it will ever be found remains a mystery, at least for now.