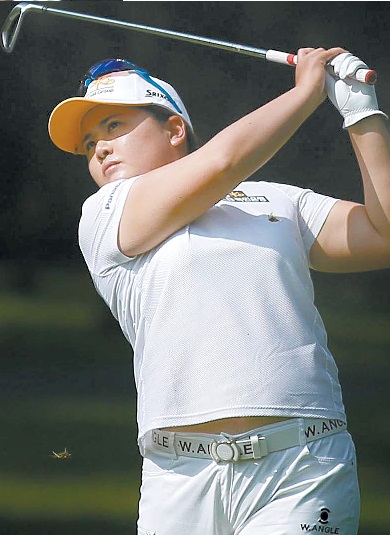 Korea’s Park In-bee swings at the 18th hole of the LPGA Lorena Ochoa Invitational, in Mexico City, on Sunday. Park won the Invitational, holding off Carlota Ciganda for her fifth victory of the season and 17th LPGA Tour title. [ap/newsis]

Park In-bee won the Lorena Ochoa Invitational on Sunday to collect her fifth victory and 17th LPGA Tour title as her title race with world No. 1 Lydia Ko heats up.

At the Club de Golf Mexico in Mexico City, world No. 2 Park hit a bogey-free 8-under 64 in the final round, which was her best round of the year, to close the event at 18-under 270. She beat Spain’s Carlota Ciganda, who had a career-low 9-under 63 on Sunday, by three strokes.

“It was fun. It was birdies after birdies, so it was fun. Carlota really got me going,” Park was quoted as saying to LPGA.com. “It was three good rounds but obviously the last round is the one that counts and the last three days I felt like I made some mistakes but today I think I got rid of all of that. I played really well.”

Ciganda, who was looking for her first win of the LPGA Tour, stayed 6-under through seven holes, including an eagle on the par-5 second hole to share the lead with Park. But the 27-year-old Korean kept her composure, responding with five birdies on the back nine holes to seal the victory. Ciganda, 25, chased one shot with a birdie on the 14th but made a critical bogey on the 16th hole.

“If they told me at the beginning, I’d get a 63, I’d have played some really good golf,” Ciganda said to LPGA.com. “I started really well with a birdie, eagle, so I had a great time. Inbee played unbelievable and she has lots of experience and she knows how to win. I just congratulate her on such a great win.”

This was Park’s first start since she withdrew from the Blue Bay LPGA in China two week ago because of a cyst on her left middle finger. It was also her first win since August when she took the Ricoh British Women’s Open to complete her career Grand Slam.

Park had been close to winning the Lorena Ochoa Invitational, the tournament hosted by Mexico’s legendary Ochoa, who won 27 LPGA Tour titles before retiring in 2010. Park was runner-up in 2012, fourth in 2013 and third in 2014. “I have been playing really well in Mexico in Lorena’s event the last few years but I haven’t been able to win the last few years, so I’m just glad to be able to take the trophy this year. It’s a thrill,” Park said.

The victory makes the season finale, the CME Group Tour Championship, more interesting as personal titles are at stake for Park and Ko who skipped the tournament in Mexico to rest. Ko won the Tour Championship in Florida last year which sealed her race to the CME Globe title, and $1 million bonus, in her rookie year.

Park’s final score on Sunday puts her slightly ahead of Ko - just 0.0161 shots per round - in the Vare Trophy standings for season scoring average, while she moved within three points of Ko in the Rolex Player of the Year award. Park needs at least an eight-place finish at the CME Group Tour Championship to tie with the 18-year-old Korea-born New Zealander in the player of the year standings, if Ko doesn’t post a top-10 herself.

“I knew I had to do something big this week to have any chance of coming into the Tour Championship,” Park said. “It’s great. It brings a lot of excitement to have something in your hand finishing off the season. I’ll definitely try to play my best next week, I’ll give it all I’ve got, and just try to play good golf like I did this week.”

Meanwhile, Kim Sei-young, who has already secured the Rookie of the Year award, finished third at 13-under after shooting 6-under 66 in the final round, while Ryu So-yeon was fourth at 11-under.