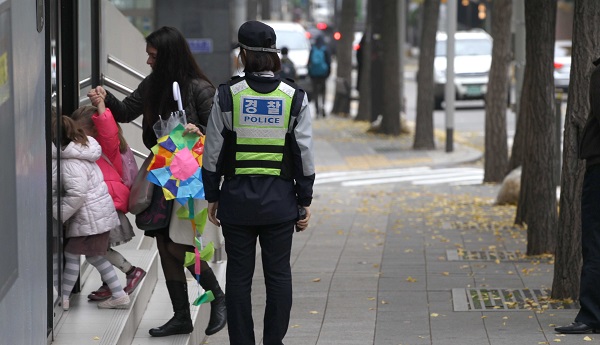 A policewoman secures the entrance to a French school in Seocho-dong, southern Seoul, on Monday. [Oh Jeong-taek]

Terrorist attacks that killed nearly 130 Parisians over the weekend had an impact on global financial markets and rattled Seoul on Monday.

For the first time in nearly two months, the benchmark Kospi retreated to below 1,950 on Monday, after losing more than 30 points or 1.53 percent compared to Friday’s trading, rekindling worries about Korea’s economic growth.

Uncertainties spiked in financial markets over fears of additional attacks and a possible contraction in the European economy that could trim already lowered projections for the global and Korean economies.

The terrorist attacks could hurt the French economy since tourism accounts for 7.5 percent of its GDP. France is the second-largest economy in the eurozone. As the European Union countries are the second-biggest export market for China, taking 15.8 percent of total Chinese exports, the European economy’s retreat could affect China and its suppliers like Korea.

The Korean Ministry of Strategy and Finance said it will watch out for any negative impact on the country’s tourism and airline industries during an emergency meeting Monday morning presided over by First Vice Minister Joo Hyung-hwan.

“European securities markets might be temporarily affected, but the impact wouldn’t be that long according to precedents in cases of terrorism,” the ministry said in a press release. “But it is possible that how the tragedy develops in the near future could drag down growth of the global economy and increase uncertainties in financial markets around the globe.”

Local stock analysts said worries over new terror attacks may pour cold water on the eurozone economy’s recovery trend by shrinking sales in both the products and services sectors.

The eurozone economy was estimated to grow 0.3 percent in the third quarter compared to 0.4 percent growth in the second.

“The Paris incident may hit consumers’ consumption at the year’s end, which is usually a peak period for shopping,” said Han Yo-seop, a senior researcher at KDB Investment & Securities. “This will intensify the inventory burden for large and small retailers so that manufacturers [in France and nearby European nations] have to reduce orders for new supplies, also bringing down rebounds of Korean stocks, particularly in industrial goods and materials.”

Some analysts said the impact on Korean industries and money market will be limited, as Korea is less likely to be exposed to the possibility of terrorism and Korea’s trade with France is not so large.

“I don’t think Korean exporters will be influenced much, as France is not a large buyer of Korean industrial products,” said Kim Dae-joon, a researcher at Korea Investment & Securities. “The travel and aviation sectors will be influenced a bit, but the impact won’t be as large as that of the Middle East respiratory syndrome crisis.”

But fear of terrorism and geographic instability may push investors out of emerging markets like Korea and into safe assets like American bonds or dollars, Kim added. Such instability may also cause larger currency volatility, which could also prompt foreigners to pull money from the Korean market.

Fears of additional attacks beyond Paris dealt a blow to stock prices of tour agencies and airlines.

Paris has indefinitely closed the Eiffel Tower and other tourist attractions in the wake of the Friday massacre by Islamic State terrorists.

Korean airlines are paying attention to whether the ripple effect from Paris will spread across Europe and North America. The immediate impact was minimal on Monday. On the Incheon-Paris route of Korean Air, 277 passengers were booked and 263 got on the plane, a totally normal ratio.