Frugal couple gives away its fortune to top students

Frugal couple gives away its fortune to top students 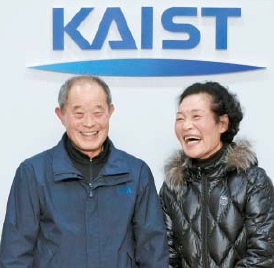 Lee Seung-woong, 74, and Cho Jung-ja, 72, visited the Korea Advanced Institute of Science and Technology (KAIST) in Deajeon on Monday to have a ceremony honoring their donation of three buildings worth 7.5 billion won ($ 6.4 million) in northern Seoul and Uijeongbu, Gyeonggi to the university.

Although the couple is worth billions of won, they have rarely bought groceries worth more than 5,000 won. Their socks have been mended countless times.

Lee and Cho got married in their later years in the early 2000s. Cho, an only child who inherited a large amount of property, suggested to Lee that they donate their fortune to society rather than to their children from Lee’s first marriage. Ten years have passed since they made that promise, and they have never hesitated to follow through.

“At first, I wanted to help children without parents,” Lee said, “while my wife wanted to support students talented in science.” Cho’s desire won out, which explains the donation to KAIST.

After Lee graduated from middle school in the countryside, he came to Seoul and had a difficult time earning money by delivering bread and running a supermarket.

Cho said she started taking on her husband’s ways after they got married.

“In the early stage of our marriage, I couldn’t understand why Lee was so frugal,” Cho said. “But I have unconsciously become like him. One day, I found myself visiting every store in a traditional market to find the cheapest chicken.”

At the ceremony, they said they will buy houses for their two sons.

“I’m so happy to achieve my goal. I would be even happier if the university cultivates as many excellent students as possible.”