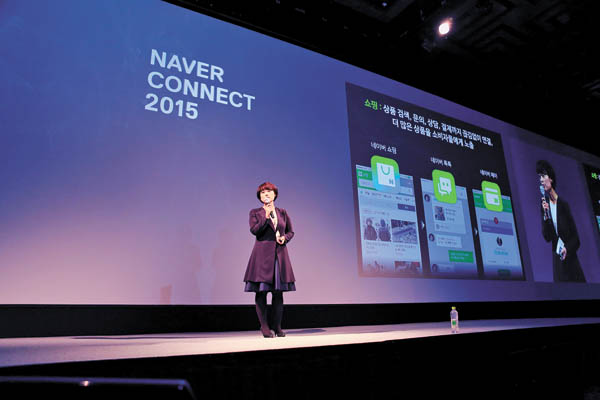 The country’s top portal service provider, with some 80 percent market share, offered a preview of its upcoming search experience on Tuesday.

Calling its search service “Live,” Naver said it will recognize the characteristics and circumstances of users when it arranges pages and processes search queries.

Kim Kwang-hyun, head of Naver’s search research center, said, “For example, if a user searches ‘today’s weather’ on a daily basis, we will put the daily weather information on top of the user’s main page. The same is true if users consume a lot of data on markets or other information.” He added that the user can configure which options to display.

“If a young woman searches ‘famous restaurants in Gangnam’ in the morning or afternoon,” he said, “the chances are good that she is looking for brunch restaurants to enjoy a meal. So we will put information about this type of restaurant on top.

“But if she did the same at night or in the late evening, it is more likely that she is looking for restaurants that serve some drinks, so the order and content will be changed even if she types the same word.”

The move is intended to satisfy the fast-changing tastes of tech-savvy Korean users at a time when mobile searching is more commonplace than through PCs and laptops.

Google said in May that it gets more search queries in the United States from people using mobile devices such as smartphones and tablets than it does from people browsing on PCs.

In Korea, queries from mobile devices surpassed those of PCs three years ago, according to Naver, backed by the country’s advanced tech infrastructure and high penetration of smartphones.

Unlike Google, which focuses on users’ queries, Naver displays a dizzying array of content on its page, from news to music videos, beauty tutorials and clips of TV shows. The search company hopes users stay longer when they browse for their interests.

In January, the company will introduce a feature that allows mobile users to engage in real-time chat on a theme-based page.

“Let’s assume there is a page devoted to K-Pop icon G Dragon,” he said, “Not only can users find popular information about him, but fans can have a real-time chat with those who admire him.”

Kim said Naver will display fashion items in a way that prioritizes information sought by those with similar tastes.

Naver currently indexes different products on e-commerce sites. The company has launched its own online-to-offline (O2O) shopping platform in December last year. It is a platform designed to draw online shoppers from brick-and-mortar stores. In September, it also launched a messenger service Naver Talk Talk, which connects users directly to a store without having to download an independent app on their smartphone. This service allows users to make inquiries directly to the stores on any subject. This is to help enhance communication between customers and small businesses, complementing the O2O business.