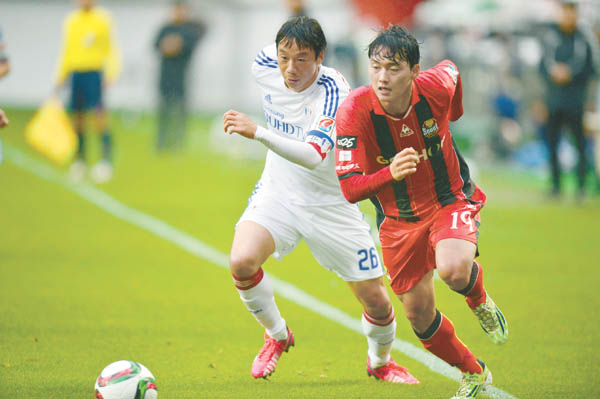 FC Seoul forward Yun Ju-tae, right, dribbles against Suwon Samsung Bluewings’ Yeom Ki-hun during their K-League Classic match at Seoul World Cup Stadium in Seoul on Nov. 7. Yun scored four goals to set most goals scored in the history of the derby, which is known as the “Super Match.” [newsis]

A “Super Sub” became super hero in the Super Match.

On Nov. 7, Yun scored every goal in Seoul’s 4-3 victory to rock home fans in a derby known as the “Super Match” in the K-League Classic. The 25-year-old has set the goal scoring record for a single game in the history of the derby, surpassing teammate Park Chu-young who previously scored three goals against Suwon in 2007.

Yun has not been a regular starting player for Seoul. But with Park sidelined with a knee injury and Brazilian striker Adriano out due to a yellow card accumulation, he was given the green light to be a starting member of the team for the first time in four months.

In rainy weather at Seoul World Cup Stadium, Yun completed his hat-trick in the 55th minute and went on to make history on the 62nd minute. His performance was meaningful to Seoul captain Cha Du-ri, who was having his retirement ceremony, and coach Choi Yong-soo who praised Yun’s performance as “madness.”

Seoul fans have been calling him as “Yun the Joker,” because of his impressive performances coming off the bench. Yun played 20 out of 24 matches as a substitute, and had a total of five goals to his credit before scoring four against Suwon.

As the league resumes this weekend, with only two matches remaining to the final, Yun said he will now aim to increase his tally to 10 goals, whether he plays as a substitute or starter. Seoul faces Jeju United on Saturday.

Yun was top prospect when he was playing for Haksung High School in Ulsan, winning national scoring titles five times. After leading Yonsei University to the U-League title, he signed with FSV Frankfurt in 2011 and played in the second division of German football league.

Yun, a native of Yangsan, South Gyeongsang, scored three goals in 30 matches for FSV Frankfurt and was later loaned to SV Sandhausen. But injuries kept preventing him from showing good performances. He returned to Korea in 2014, signing with FC Seoul.

In an interview with Ilgan Sports last week, Yun looked back on his crazy performance at the Super Match and his idol Park Chu-young.

A. I’m just thankful that it’s a nickname that people can think of me. But I’m not forever a prospect and forever a substitute. I want to improve myself and get rid of this “sub” nickname.

Did you feel pressured when you heard you were going to start in the Super Match?

I scored my K-League debut goal in the Super Match [last year], so I didn’t have any pressure or fear against Suwon. I was just hyped up.

How do you feel after scoring four goals?

I don’t know. I still can’t believe that I scored four goals. I asked myself if I could score four goals again in the Super Match and my answer was ‘No.’ It was the lifetime performance for me.

What was your goal celebration about?

All four were about [Seoul captain] Cha Du-ri. He is special senior and person to me. Inside or outside of football, he made me become a better player. We also share a common issue: Germany.

Why is Park Chu-young your role model?

He was my idol from childhood and has always been the best player for me. When I was in Germany, I watched video clips of Park more than any other player. My skills are a result of studying Park’s plays in the video. When I first saw him in Seoul, my heart was beating fast. Park now cares about me. As I experience this pro football life, I have more respect for him. It’s remarkable that he can still show such performance even if he is over 30.

What can you say about breaking Park’s scoring record in the Super Match?

I never imagined that I can surpass Park. I thought I would never overtake him. Honestly, before the match, I didn’t even know who had the record. It means a lot to me because probably for the first and last time, I beat my idol Park (laugh). He also congratulated me.

Teammates call you ‘Yoon Shooting.’ Why?

That nickname was given to me by Park Chu-young because I take too many shots. Sometimes, I was scolded for being selfish. I’m learning a lot from Park. It’s an honor to train with my role model.

Do you have any foreign role models?

I like Spanish forwards David Villa and Fernando Torres. Villa isn’t quick, but he knows how to score. I liked Torres when he was with Liverpool. I think his steps are really fascinating. Although I like these two players, my role model will always be Park Chu-young.

Some people say you could be a regular starter in another team. What do you think?

I also heard that, but I don’t agree. There are good strikers in other teams and most are foreign attackers. I think the situation will be the same if I went to other teams. Besides, I like Seoul. I want to learn from good senior players and will develop in Seoul. I don’t want to go to other teams, and I don’t have regrets in Seoul. I will not rush, but will maximize my efforts to overcome my situation.

Do you agree Seoul has fierce competition for a regular striker position?

Do you think about playing with the national team after watching Lee Jae-sung and Hwang Ui-jo playing for Korea?

Do you have a plan to play overseas again?

I’m not a prospect anymore and I need to make up my mind. I will be 26 years old next year and I think I have to produce some results. So, I’m not thinking about going overseas, but only to play hard in this environment. Right now, I think going overseas is an empty dream.