Changes to the Korean tax law have added to the burden of companies that are wrestling with investigations by different local governments.

According to a survey by the nation’s largest business lobby group, the Federation of Korean Industries (FKI), nearly 60 percent said their tax rate been rising since 2011, and 77 percent said they expect their tax payment to further rise because of the 2014 tax revision.

Companies are also worried at the growing tax levied by local authorities, as 66.2 percent said their local government rates have risen compared to a year ago. Almost 90 percent of those polled said they were concerned about tax requirements by multiple levels of government since the revision of the law.

“Companies that have multiple business sites across the country are burdened from the frequent tax audit by different local governments,” said Hong Seong-il, head of the finance and taxation team at FKI. “Currently the law that will allow all the tax auditing rights to be concentrated to the National Tax Service is sitting at the National Assembly. We hope the law would pass quickly.” 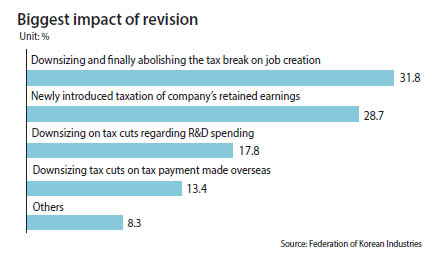 The survey was conducted on 1,000 companies with annual revenue of over 100 billion won between May 12 and June 5. Only 157 companies answered.

The FKI said the companies felt that they have paid more in taxes since 2011 largely because of the reduction in tax cuts, including the recent abolishment on the cuts they received from either maintaining the current level of employment or increasing new hires, labeled as job creation. This year, the government collected a total of 32.6 trillion won ($28.06 billion) in corporate tax as of August, 2.6 trillion won more than the same period last year.

The job-related tax cuts were considered the biggest reasons for increased taxes (31.8 percent) while the newly implemented tax under the 2014 revised law on retained earnings was considered the second primary cause (28.7 percent).

Last year, the government included a tax on cash stashed within major conglomerates in its revised bill as part of its campaign to bolster the economy,.

The target was to force companies to distribute the money they had been piling up, whether in the form of dividends paid out to investors or raised salaries.

By increasing the payments investors or employees would receive, the government hopes it will help increase consumer spending and therefore result as a positive contribution to domestic market growth.

A majority of companies (82.1 percent) said the higher tax burden will not contribute to the revitalization of the economy.

Some 60.5 percent demanded that the government raise its tax cuts on investments, while 15.3 percent asked for tax benefits on R&D.

A recent study by the Bank of Korea showed that leading conglomerates’ earnings growth has been slowing in recent years, especially since 2010.

Operating profit rate to revenue also dropped from 6.5 percent to 4.4 percent during the same period.

The business lobby group noted in its report that while companies’ performances have been worsening every year, it is clear that their burden has been growing largely on the downsizing of tax cuts.